Propane tanks explode, cause fire at ACME Galvanizing on city's south side 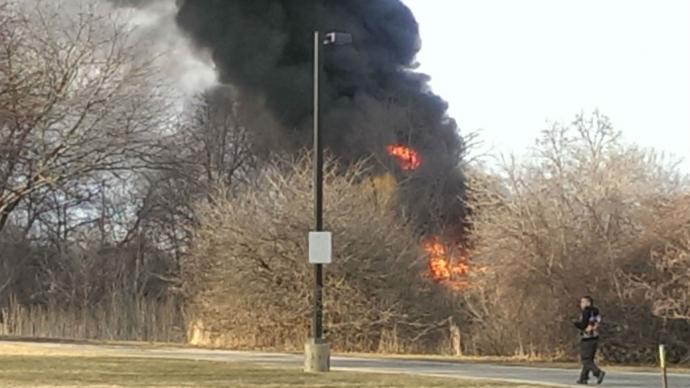 Employees still waiting for the all clear to return after explosions and a roaring fire rock an employer and surrounding neighborhood on Milwaukee's south side.

The fire broke out shortly before 8 AM Monday at ACME Galvanizing near Pulaski Park.

\"It was scary, especially at 7:30 in the morning,\" said Horacio Cordero, a witness who lives near the steel plant.

The column of black smoke could be seen for miles. Firefighters were able to contain the blaze in a little over an hour and spent the rest of the day investigating.

The Hazmat team was also called out to the scene. They left shortly before 5 PM.

Deputy fire chief Terry Lintonen with the Milwaukee Fire Department told CBS 58 several propane tanks caught fire and exploded in a separate, outside storage building.  He said some of those tanks weighed as much as 100 pounds.

The building collapsed after one of the many blasts shook the neighborhood.

\"I heard probably about 8 explosions\",\" said Nicolas Manyen, an employee at ACME Galvanizing, who also represents the union.

Firefighters attacked the flames and thick smoke from above and also doused water on the nearby main building to keep the fire from spreading.

Those inside the business followed the evacuation plan and all 30 shift workers made it out safely and there were no injuries.

\"We do train for stuff like this, chemical spills, hazard material spills, fires,\" said Manyen.

Manyen said propane is used to fuel fork lifts to help workers move hundreds of thousands of pounds of steel.

He said a Ferrell Gas employee was filling up the tanks when there was some sort of mishap.

\"They were pretty loud. They did shake the ground a little bit and they sent shrapnel into the air,\" Manyen said. \"These are steel drums about this big filled with propane.\"

\"Typically in these types of things and I'm speculating just a little bit, but usually it's when you're filling or Changing bottles, it'll find an ignition source of some sort,\" Lintonen said. \"I don't know. It's still under investigation.\"

Shift employees were sent home with pay. Many, however, had to wait several hours to get back to their cars since that area was blocked off by investigators.

Manyen says employees expect calls in the morning to see if they can return to work.