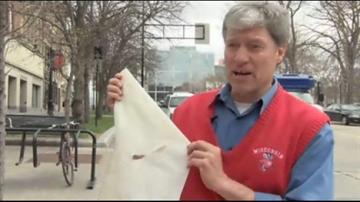 MILWAUKEE-Democratic state lawmaker Brett Hulsey showed up like he promised at the Republican State Convention Friday but instead of staging an army of confederate re-enactors, it was more like an army of one.

Just the night before Hulsey said he would pass out white hoods similar to the KKK to expose the racist policies of the GOP.

But he never even took them out of his car.

He said he would give them to republican lawmakers in a political statement to expose what he calls racist policies, but it seems that idea backfired. Hulsey says he received threats and condemnation from folks all across the country.

But Hulsey says he's not backing down from plans to confront the governor Friday night and he plans to shake hands with him when he arrives.