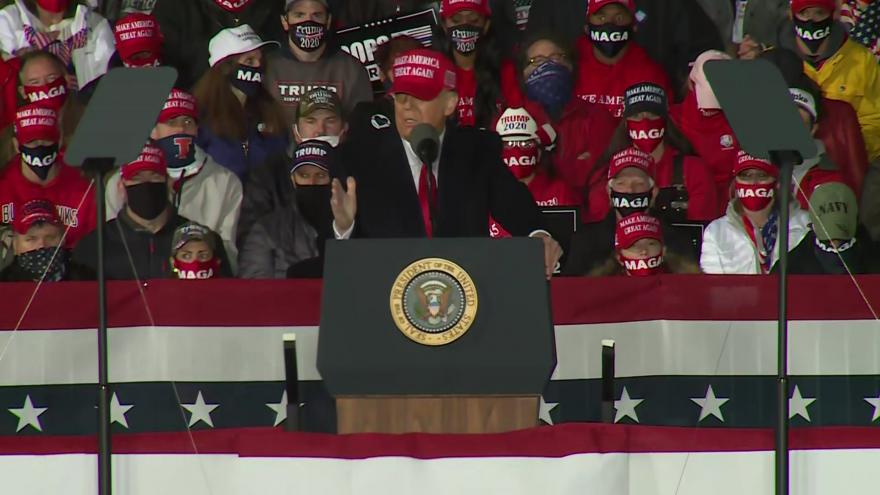 JANESVILLE, Wis. (CBS 58) -- President Donald Trump campaigned in Janesville, Wisconsin on Saturday, Oct. 17, exactly two weeks after his diagnosis forced him to cancel a rally there.

Pres. Trump arrived in Air Force One at the Southern Wisconsin Regional Airport just after 6:30 p.m.

.@realDonaldTrump is scheduled to speak at 6 p.m. here at the Southern Wisconsin Regional Airport in Janesville, Wisconsin. pic.twitter.com/XVHbjXiF8v

Much of Pres. Trump's speech centered around law and order. But he's taking heat for holding a rally in Wisconsin amid a surge in COVID-19 cases.

Supporters were lined up ore than 12 hours ahead of his arrival.

"You can be careful, you can be cautious but you have to live your lives... and people have freedom, I'm an adult 32 I'm not a child, I'm a grown up and I can choose what I want to do," said Leslie Spears, President Trump supporter.

We’re in Janesville this morning, where a couple hundred people are already in line ahead of @realDonaldTrump’s rally. Doors open at 3 p.m. pic.twitter.com/HJcwZG6CEG

"In 30 mile-an-hour winds, outside, I'm not overly concerned about this," said Johnson. "...I'm watching those case numbers very carefully. It concerns me. Let's face it Scott Walker and I months ago co-authored an op-ed where we said use a mask."

Trump focused his speech on his support for law enforcement. He also thanked officers who responded in Kenosha during unrest following the shooting of Jacob Blake.

"Wisconsin is in the grips of one of the worst coronavirus outbreaks in the country. Jill and I are praying for the health of those who’ve contracted the virus, and for the families who are mourning the loss of a loved one. We have lost far too many lives to this pandemic — and the sad fact is, it didn’t have to be this way.

President Trump is knowingly downplaying the severity of the virus. At virtually every turn, he has panicked and tried to wish it away, rather than doing the hard work to get it under control. And today, 150,000 fewer Wisconsin workers are employed than when President Trump took office and his failed response to the pandemic has crushed Wisconsin’s economy.

If you send me to the White House, I’ll be ready to tackle this crisis on day one. My administration will trust the science, lead by example, speak the truth to the American people, and help Wisconsin families and small businesses build back better than before."