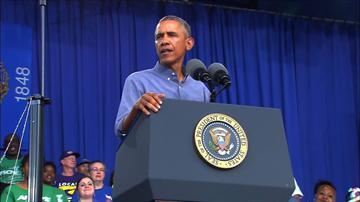 MILWAUKEE (CNN) -- President Barack Obama told a large union audience in Wisconsin on Monday that while \"Republicans in Congress love to say no,\" he is the one who \"placed a bet on America's workers.\"

In a speech that skirted the line between politics and policy, Obama outlined what many Democrats are using as a midterm platform, highlighting hopes to raise the minimum wage and pass immigration reform. Obama also used the speech to portray Republicans as obstructionists who are holding the country back.

The President told the receptive audience that \"most of the policies I am talking about have two things in common. They are going to help more families get ahead. And Republicans who run our Congress oppose almost all of them.\"

When the crowd broke out in a chorus of boos, Obama reflexively turned to a now oft-used line: \"Don't boo, vote. Don't boo, vote. It is easy to boo, I want you to vote.\"

The political line was a staple during Obama's 2012 re-election campaign.

\"I want an economy where your hard work pays off with higher wages and higher income and fair pay for women and workplace flexibility for parents and affordable health insurance and decent retirement benefits,\" Obama said. \"I'm not asking for the moon, I just want a good deal for American workers.\"

Although the Obama administration billed the appearance as an official White House event set to \"underscore the important progress America has made since the economic collapse,\" the Laborfest speech featured a jacket-less Obama who, for most the most part, appeared to be in campaign mode.

The President used the Labor Day gathering of 6,000 union members and their families to herald organized labor's role in passing the 40-hour work week, overtime pay for workers and a minimum wage. Standing before helmet-clad workers sporting \"We Are One\" t-shirts, Obama also said he would likely join a union.

\"If I were looking for a good job that lets me build some security for my job, I'd join a union,\" the President said to raucous applause. \"If I were busting my butt in the service industry and wanted an honest day's pay for an honest day's work, I'd join a union...I'd want a union looking out for me and if I cared about these things I'd also want more Democrats looking out for me.\"

The midterms are important for Democrats and Obama's legacy. Midterms in a second term are historically bad for the President's party, and Democrats are facing the prospect of losing the Senate and staying the minority in the House in 2014.

\"Republicans in Congress love to say no,\" Obama said. \"Those are just facts, the facts of life. They say no to everything.\"

While Obama focused much of the speech on the midterms, he was noticeably mum on Wisconsin's hotly contested race for governor between Democrat Mary Burke and Republican incumbent Scott Walker.

According to a Marquette Law School poll, 49% of likely Wisconsin voters support Burke compared to 47% for Walker. The survey has a sampling error of plus or minus four percentage points, which means the two candidates are locked in a statistical dead heat.

Before Obama's speech, Burke walked around Laborfest and shook hands with supporters and union members.

Burke and Obama did not appear on stage together, but the gubernatorial candidate did tweet that she had a \"great chat\" with Obama backstage and that she looks \"fwd to seeing him again b4 11/4.\"

A spokesman for Burke said before the event that the two won't appear together because the event is \"an official White House event and not a campaign event,\" therefore her \"participation in the public portion of events would not be appropriate.\"

Obama also met Walker, who greeted and shook hands with the President when he walked off Air Force One at General Mitchell International Airport in Milwaukee.

Wisconsin has been a friendly state for Obama. In 2008, he won the state by 14 points and in 2012 he carried the state by seven points.