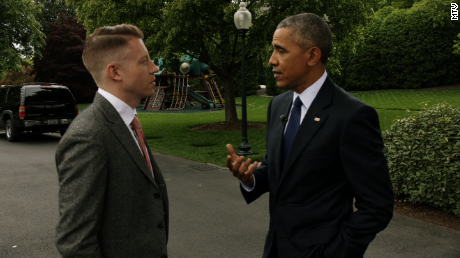 (CNN) President Barack Obama gets candid with Grammy winner Macklemore in a new MTV documentary about the opioid crisis in America.

"The good news is that awareness is starting to rise," Obama said in an exclusive clip provided to CNN. "And, I'll be honest with you, part of what's starting to change is that the opioids crisis is getting into communities that are suburban, that are relatively well to do, rural communities, white communities, and people's kids who are being affected are folks who have a voice."

Obama's conversation with Macklemore is the centerpiece of the one-hour documentary, titled "Prescription For Change: Ending America's Opioid Crisis."

RELATED: This is America on drugs: A visual guide

In the documentary, MTV has said, Obama and Macklemore will talk about their own experiences with substance use and about efforts to end the stigma of addiction.

Thus far, Obama said in the clip, "how we've dealt with the reduction of addiction and drugs has been oftentimes counterproductive."

"We need to shift a lot more resources into treatment but we're still way short of where we need to be," he said.

The documentary will also share the journey of three women on the road to recovery from addiction.

Macklemore served as an executive producer on the film, which premiered earlier this week at a special White House screening.