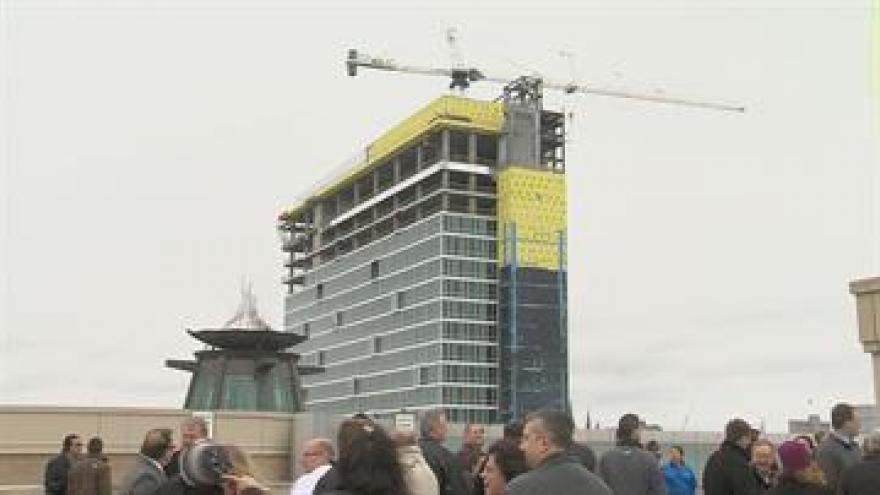 MILWAUKEE -- When it opens next fall, the Potawatomi's new hotel in the Menomonee Valley will add 230 full-time jobs to the nearly 3,000 Potawatomi Bingo & Casino already employs.

Those are jobs the tribe and Milwaukee leaders will fight to keep here.

"This was a $150 million commitment to the city of Milwaukee," Forest County Potawatomi Chairman Gus Frank said.

A commitment one step closer to opening.  Potawatomi Casino and tribal leaders celebrated the topping off of their  new 20-story hotel Friday morning.

"This is what we did it for, for people to be able to provide for their families," Frank said.

The hotel will feature nearly 400 guest rooms, seven meeting rooms and a full-service restaurant.  But the numbers Milwaukee Mayor Tom Barrett is most concerned about involve jobs.

"I see hundreds of jobs that are created that allow people to support their family," Barrett said.  "And when this hotel is finished we will see even more jobs."

But the Potawatomi are worried the Meonominee Tribe's planned casino in Kenosha would steal hundreds of millions in revenue and thousands of those jobs.

"The employees that we are going to be hiring for this hotel and the employees at this casino are the ones that are going to feel the impacts of a Kenosha casino directly," Forest County Potawatomi Attorney General Jeff Crawford said.

Crawford tells CBS-58 that's why the tribe is still against the Kenosha project.

"I don't know where they come up with their creative thinking," Crawford said.  "But the facts are our agreement says the exact  opposite of what they're representing right now."

Milwaukee County Executive Chris Abele understands Kenosha's desire for their own casino and the potential for new jobs there.  But Abele says Milwaukee can't afford to deal in probabilities.

"We don't have to speculate," Abele said.  "Dollars come in from Potawatomi right now.  $200 million has been invested, thousands of jobs have been created.

Governor Walker has the final say on that Kenosha project and he's still looking over the facts.

Walker said in Milwaukee Friday he'd like to make a decision early next week.