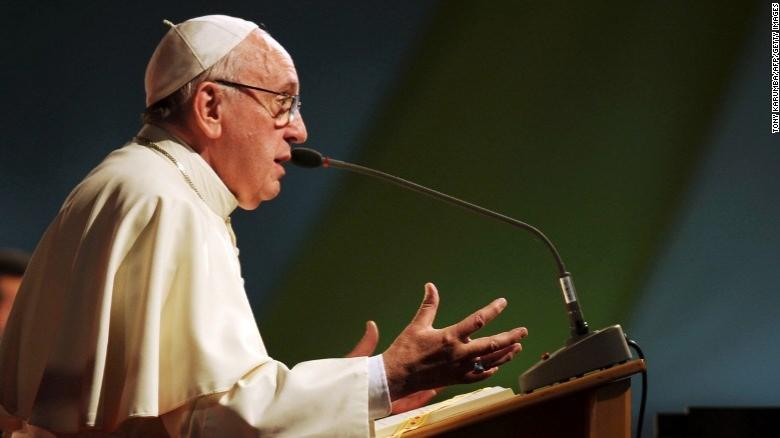 (CNN)Pope Francis waded into the heart of a Kenyan shantytown, spreading a message of love and lashing out at the elite in a neighborhood that feels largely disenfranchised.

Francis' visit to Kangemi mirrors his message of service to the poor during his three days in Nairobi.

In the sprawling slum filled with tin-roofed homes, he described lack of basic services as "new forms of colonialism."

"To see these signs of good living that increase daily in your midst in no way entails a disregard for the dreadful injustice of social exclusion," he said.

"Our world has a grave social debt toward the poor who lack access to drinking water because they are denied a life consistent with their inalienable dignity."Kangemi residents welcomed his focus on the downtrodden.

"Sometimes challenges in slums almost cause us to despair and some people give up working in slums," said Sister Mari Killeen, who works in slum areas.

"Your (pope's) visit gives us courage. By coming here, you shine a light on the challenges. Your meeting with us gives us dignity."

When Francis weaved through the slum's narrow streets in his popemobile, adoring crowds reached out to touch his hand as he waved from behind a clear protective covering.

'I'm so happy, we are so blessed," said Magdalene Mwikali, 36, of Kangemi.

"He's left all those rich neighborhoods to come here," she said. " He's shown us we are important, that we matter, that God loves us too."

Excited residents have prepared for this trip for weeks, Mwikali said.

Scores volunteered to clean littered streets and cover dirt roads with gravel. Others perched Vatican flags on streets leading to the church."He has restored my faith, I have a role model and will practice his humility, " said Regina Kimende, who came from a neighboring parish. " After seeing him today, I have decided my life is at the church. I'm starting all over."During Francis' third and last day in Kenya, he met youths at a sports center in Nairobi, and will later talk with bishops.

Later, he'll board a flight Friday to neighboring Uganda, where he'll kick off his visit at the state house with President Yoweri Museveni and the nation' officials.

After his visit to Uganda, he'll head to the Central African Republic, the latter in the throes of a conflict in which Christians and Muslims are slaughtering one another.The Pope's first papal trip to Africa started in Kenya on Wednesday. It has focused on issues close to his heart: climate change, the poor and children.

A day before, he delivered a stern warning just days ahead of a key climate change conference in Paris.

"It would be sad, and I dare say even catastrophic, were particular interests to prevail over the common good and lead to manipulating information in order to protect their own plans and projects," the Pope said.

He urged nations to reach an agreement over curbing fossil fuel emissions, and work together to find solutions to environmental degradation.

But it was Francis' comments on the pillaging of African resources that drew a louder response from the crowd.

Africans cannot afford to remain silent on the illegal trade in precious stones and the poaching of elephants for ivory, which "fuels political instability, organized crime and terrorism," he said.

The message reverberated with a nation where farming and tourism are a crucial part of the economy.The Pope's message of hope, peace and reconciliation is reaching out to a continent with the faith's fastest growing population.

"The Catholic population there (Africa) has grown by 238% since 1980 and is approaching 200 million," said Bill O'Keefe, a vice president at Catholic Relief Services, a church-affiliated U.S. humanitarian group that works in Africa.

Francis' predecessor, Pope Benedict, also visited several countries in Africa. During his nearly three decades in the papacy, Pope John Paul II also made dozens of trips to the continent.  Aside from visiting a region that will shape the face of the Catholic Church, the Pope's plan to stop at a mosque in the Central African Republic sends a powerful message.

In the Central African Republic, a Muslim rebel group overthrew the Christian president two years ago, prompting reprisal attacks by both Christian and Muslim militias.

Those attacks continue to this day, and have displaced hundreds of thousands of people.