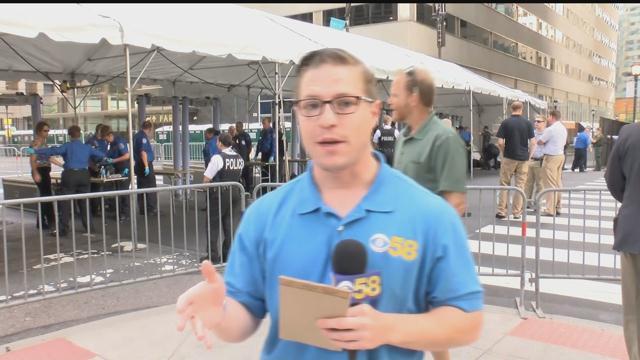 Pope Francis is urging world leaders to come up with ways to combat war, poverty and economic destruction.  His sweeping address came during a speech this morning at the United Nations during which he also offered words of gratitude.

"Thank you, each and all, for your efforts in the service of mankind," said Pope Francis.

In his native Spanish, the Pope appealed to the General Assembly to spread equality and dignity from those in power, to the people Francis called, the excluded.'

The Pope repeated his warning about climate change, and also called for a world free of nuclear weapons. He expressed optimism for the pending nuclear agreement with Iran.

The Pope concluded his speech by blessing the crowd.  He then traveled across Manhattan to visit the 911 Memorial to pray for victims of the terror attack on the world trade center.

The Pope arrives at the final destination of his US tour tomorrow morning in Philadelphia. People there are prepped and awaiting his visit.

Streets in downtown Philadelphia are shutdown to prepare for the Pope.

Only foot traffic is being allowed.

There are security check points to enter the Secure Pope Zone.

Major roads, highways and bridges will be shutdown to create a large secure area.

Pope memorabilia is available as people await the arrival of the Pope.

Possibly millions of people are expected for the Sunday evening mass.