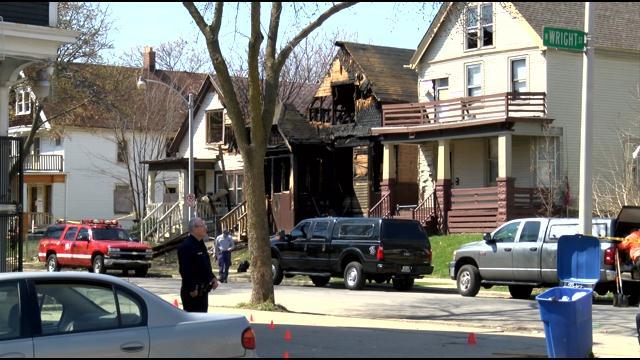 Milwaukee police say a house fire that killed two people on the city's north side was set on purpose. The fire closed down several blocks around the home near 38th and Wright Street much of Friday morning into the afternoon.

Milwaukee fire crews responded to the home just after 3 a.m. The assistant fire chief says the entire house was on fire as soon as they arrived.

\"There is pretty darn near incineration on the first and second floor in the front,\" Assistant Chief Dan Lipski said early Friday morning.

Oxygen tanks inside exploded for the first ten minutes and spread the fire to neighboring homes. A woman escaped out a window and was taken to the hospital, but crews found two bodies inside.

Police only identified one victim as being a 27-year-old male, but a family friend says the victim is her uncle's good friend, Dontray Jones.

\"I really don't know why anyone would want to take his life, I really don't know what happened, but he was a good person.\" Davashia Porter said at the scene. Jones' family and friends screamed and cried, some dropping to the ground, after officers verified his identity with a family member.

Police only identified the second victim as an adult woman.

Milwaukee police worked with federal agents and the state fire marshal to determine the fire was arson. Neighbors say they heard fighting outside the house earlier in the night and police arrested two men at the scene.

\"There are people in our custody, but it's related to the overall investigation, not necessarily at this point the deaths of the people caught up in the fire,\" Raap said.

Now neighbors like Shannon Brown and his eight kids, who escaped moments after the fire started, don't have a place to live. Brown can't understand why someone would attack his neighborhood.

\"I just know the fire was very, very fast,\" Brown said. \"Within like 30 seconds it went from a small flame to like the whole house on fire.\"

Milwaukee police say they have developed a suspect for the arson, but haven't released a description. If you have information about the fire, call MPD at 414-935-7360.