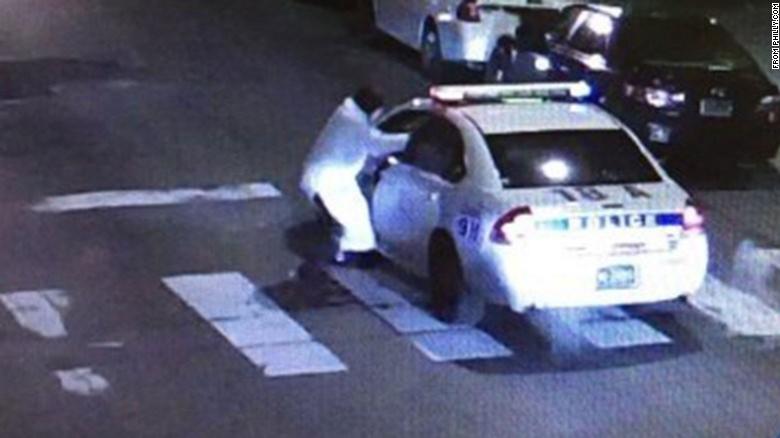 (CNN)A 30-year-old man has confessed to shooting a Philadelphia police officer in the name of the "Islamic State," presumably referring to the terrorist group ISIS, officials said Friday.

Despite being seriously injured, the four-year police veteran got out of his patrol car and shot the assailant, who later was apprehended by other officers, Ross said.

James Clarke, police homicide captain, told CNN the suspect said to investigators: "I follow Allah. I pledge my allegiance to the Islamic State and that's why I did what I did."

The alleged gunman was identified by police as Edward Archer, of Yeadon, a Philadelphia suburb.

Hartnett shouted desperately into his police radio after someone, authorities say, approached his patrol car and shot him as he sat there Thursday night.

"Shots fired! ... I'm bleeding heavily!" Hartnett shouts in a recording of his radio call for backup. "I'm bleeding. Get us another unit out here!"

Hartnett managed to fire back and wound the gunman after what authorities say was an apparent attempt to execute the officer at a city intersection.

The gunman fired 13 shots from a semiautomatic pistol into Hartnett's car as the officer sat in the driver's seat, a law enforcement source told CNN. The shooting happened about 11:30 p.m. in west Philadelphia, CNN affiliate KYW reported.

Hartnett was shot three times in an arm and returned fire, the source said.

A 9mm Glock 17 was recovered from Archer, police said. The gun was reported stolen from the home of a police officer in 2013.

Hartnett was taken to a hospital, where he underwent surgery for a broken arm, KYW reported.

A picture -- one that the Philadelphia Inquirer newspaper says is a still frame from surveillance video of the shooting -- shows a person standing right next to the car with his arm through the lowered driver's-side window, close enough to be shooting someone at point-blank range.

The Inquirer did not report where it got the picture. But Ross told reporters that he had seen video of the incident and that it was "absolutely one of the scariest things I've ever seen."

CNN hasn't independently confirmed the authenticity of the image. Information on the origin of the video that Ross referenced and what Hartnett had been doing in the moments leading to the shooting wasn't immediately available.

The shooting caught the attention of Gov. Tom Wolf, who said he is "thankful that Officer Hartnett is alive and not facing life-threatening injuries after being ambushed."

"We wish him and his family the best during his recovery. This alleged intentional act of violence against an officer seeking to help a fellow citizen is horrifying and has no place in Pennsylvania," he said.