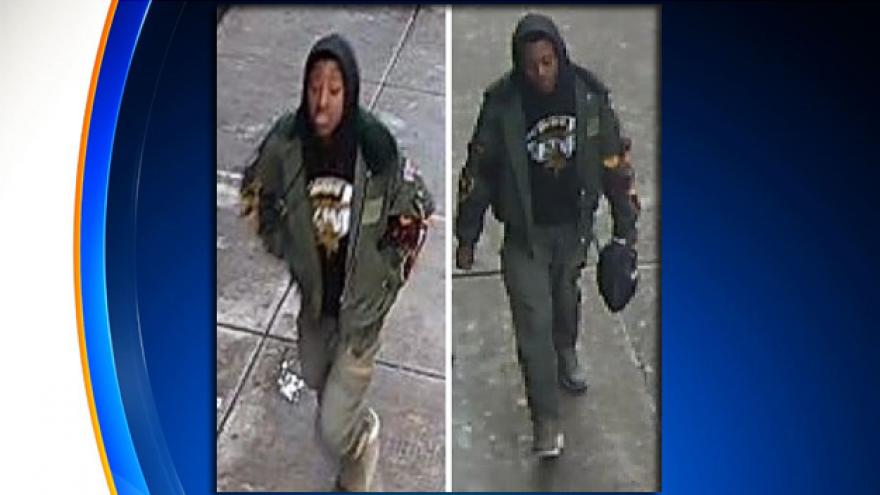 NEW YORK (CBSNewYork) — The hunt is on for a violent robber who police said targeted an 81-year-old woman as well as a mother and her two children on the Upper West Side.

Surveillance video shows the suspect, believed to be in his early to mid 20s, who police said struck two times in a span of eight minutes midday Tuesday.

The video shows the suspect watching as a 37-year-old woman gets money out of an ATM at a Chase bank on Broadway at West 70th Street.

The victim was with her 4-year-old and 5-month-old daughters when the man lunged at them the moment the woman handed the older girl the cash, police said.

In the struggle, the man took off with $300 and the girl’s glove, CBS2’s Dave Carlin reported.

The woman and children were not hurt.

“Crime can happen anywhere and it was probably a moment of opportunity,” said Upper West Side resident Barbara Litt.

Eight minutes earlier, police say an 81-year old-woman was inside a post office at 178 Columbus Ave. at West 68th Street when the suspect shoved her to the floor and stole her purse containing her cell phone, medication and $65 in cash.

She was taken to the hospital to be checked out for bruising and pains to her back and arm.

Police say the suspect is about 5 feet 4 to 5 feet 6 inches tall. He was last seen wearing a black hooded sweater, a green flight jacket, gray sweatpants and gray sneakers.