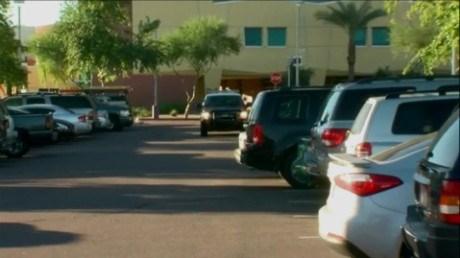 (CNN) At midnight, staff at Cardon Children's Medical Center checked on 5-year-old Helious Griffith and his mother, who was staying with him at the hospital in Mesa, Arizona.

But just two hours later, in the early hours of Saturday, during the next check, they were found dead, police said.

Mesa police spokesman Steve Berry called the nightmarish scene an apparent murder-suicide. The mother, who was in her 20s, apparently shot herself. Berry did not say how Helious died.

Police on Saturday evening said there was no clear motive.

The child had been in the 206-bed children's hospital, which sits alongside Banner Desert Medical Center some 15 miles east of Phoenix, for "about a week," Berry said. He was in "a regular room," the police spokesman added.

The Arizona Department of Child Safety was contacted about the situation as recently as Thursday, according to the police spokesman, who did not say why.

Tami Griffith last month apparently started an appeal on the YouCaring website. The author said she had a special-needs son and they needed $1,800 for a used car. The page features a 2014 photo of a smiling boy and a woman dressed in Halloween costumes.

"My son's name is Helious (like the Greek Sun God Helios) and he has cerebral palsy with dystonia, he has sensitivities to audio, odor, and touch," Griffith purportedly wrote. "He also suffers from separation anxiety when I'm out of his line of sight where he cries and cannot self-calm. He has been traumatized by doctors where now he expresses extreme anxiety and downright terror when he smells rubbing alcohol and/or see someone in scrubs or lab coat."

CNN was unable to verify who posted the page.

Neither law enforcement officials nor hospital personnel would comment on Helious' diagnosis or condition.

David Lozano -- a spokesman for Banner Health, the company that runs Cardon Children's Medical Center -- said that "at no time were others impacted" by what he also called the "apparent murder-suicide."

"The safety of our patients, associates and visitors is paramount to us and is our top priority at this time," Lozano added.

It's not clear how the child's mother got a gun into the hospital. Banner Health has a policy -- which is posted at entrances -- against carrying firearms and weapons into its facilities, Lozano said.

Berry told CNN affiliate KXNV in Phoenix that the hospital is "cooperating in any way possible" with the investigation.

"They will provide our investigators with information on the child, the family, ... any treatment, anything that may assist us, if you can -- if there's any way to understand -- what led to this."