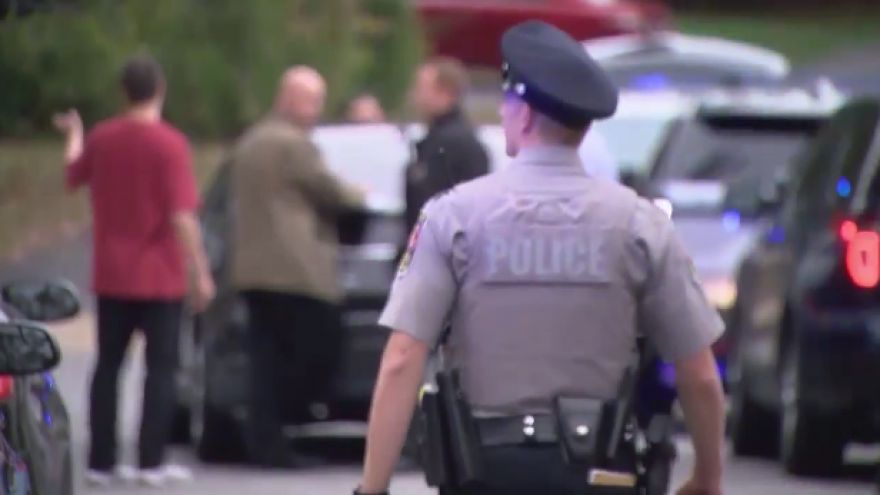 Around 3:30 p.m., police were dispatched to a single-family home along the 7500 block of Springfield Hills Drive in Springfield.
According to investigators, a 70-year-old man attacked his 76-year-old wife with an ax, prompting the large police response.

While officers were en-route to the home, dispatchers relayed that a stepdaughter managed to fend the man off of his wife. The stepdaughter also grabbed hold of the ax, sending the man running inside the well-kept two-story home.

In preparation for a possible standoff, police established a perimeter in the neighborhood. That's when one officer saw the man on the garage floor with critical injuries. That officer shouted into his radio, "Get me a trauma kit up here! Get me a trauma kit!"

Paramedics transported the couple to the hospital by ambulance. Officials explain the wife has lacerations to her face and neck, which are believed to be non-life-threatening. However, the husband's "self-inflicted" wounds were much more severe. He died at the hospital.

Police have not disclosed what sparked the dispute, but say when the stepdaughter arrived at the home, she was unable to open the front door. She subsequently forced open the door only to witness the ax assault in the home's foyer. It's not clear if drugs or alcohol played any role.

Residents, many returning from school and work, told ABC7 their middle-class neighborhood is "safe" and "quiet." Others expressed genuine shock at the startling allegations made by police.

"I'd never seen anything like that," stated Zury Bradcovich who witnessed part of the attack through a window. "I don't know if he was on medication. I really have no idea because he always looked the quiet, calm type, I don't know what happened to him."

"I've never heard a bad thing come from that home," stated another woman who did not care to share her name. "I just can't believe this happened."

The husband's name is not being released in order to protect the wife's privacy.