Police kill teen: Why Madison's investigation will be different than Ferguson 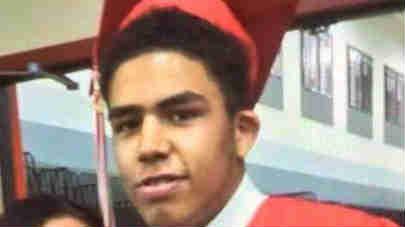 When an officer kills an unarmed suspect, the question arises time and again: Can a police department investigate a high-stakes case involving one of its own, without bias?

For Wisconsin residents decrying the death of unarmed teen Tony Robinson, the question isn't even an issue.

\"The investigation is being conducted by the state. We have a new law here in Wisconsin where departments are no longer conducting their own internal investigations for officer-involved shootings,\" Madison Mayor Paul Soglin said.

In fact, Wisconsin is one of only two states with such legislation. The other is Connecticut.

And that brings some comfort to Robinson's family.

\"I trust Wisconsin and the way they're handling the investigation,\" Robinson's uncle Turin Carter told reporters.

\"We spoke to investigators from DCI (Department of Criminal Investigation). We trust them, and we trust them to handle this with integrity and to treat it as it comes. We don't want our biases involved, we don't want anybody else's. We want them to act strictly as fact-finders, and that's what we believe in, and we have confidence in that.\"

What the laws say

Wisconsin's law, which was enacted just last April, requires \"an investigation that is conducted by at least two investigators ... neither of whom is employed by a law enforcement agency that employs a law enforcement officer involved in the officer-involved death.\"

Connecticut's law requires the state's Division of Criminal Justice with investigating any deadly force by law enforcement, according to the National Conference of State Legislatures.

After that, Connecticut's Division of Criminal Justice must submit a report to the state's chief attorney detailing whether the use of deadly force was appropriate.

While such laws are rather novel, several other states have proposed measures about appointing special prosecutors for, or providing independent investigation in, officer-involved deaths.

Not the first time

Though Wisconsin's law has been in place for less than a year, it has already been applied in another officer-related killing.

Milwaukee police officer Christopher Manney shot Dontre Hamilton, a mentally ill man, more than a dozen times last April. The officer said he opened fire when Hamilton grabbed his baton and struck him with it.

Manney was not charged in the death, but he was fired for not following protocol.

Robinson's death stirred memories of two other unarmed men killed by police: Michael Brown, who was shot by officer Darren Wilson in Ferguson, Missouri, and Eric Garner, who died at the hands of New York police officer Daniel Pantaleo.

But there are stark differences between Robinson's case and the two others.

After Brown's death in August, Ferguson Police Chief Thomas Jackson asked the neighboring St. Louis County Police Department to investigate. The case was not investigated by the state and was referred to a grand jury -- just like in Garner's case.

\"The decisions of grand juries not to indict the officers involved in the deaths of Eric Garner and Michael Brown raised two primary concerns,\" the NCSL said. \"First, many were worried that since the evidence on which grand juries base their assessment is sealed, there is no opportunity for public scrutiny of their decisions.

\"Second, there was apprehension over the decision not to appoint a special prosecutor in either case. Some are concerned that police may receive favorable treatment due to the close proximity in which law enforcement and district attorneys work.\"

Robinson's case won't just by handled by state investigators; it'll go through another layer of scrutiny by the district attorney's office, Koval said.

\"The State of Wisconsin's Division of Criminal Investigation (DCI) has the exclusive authority to investigate all elements of the officer involved shooting -- forensics, interviews, technology feeds, etc.,\" Koval wrote on his official blog.

\"This investigation is then turned directly over to the second layer of review, the District Attorney's Office, who then makes a ruling on the question of whether there is criminal culpability on the part of my officer.\"

After the deaths of Brown and Garner, President Barack Obama announced the \"Task Force on 21st Century Policing,\" aimed at strengthening trust between communities and officers and identifying which practices can be improved.

\"The importance of making sure that the sense of accountability when, in fact, law enforcement is involved in a deadly shooting is something that I think communities across the board are going to need to consider,\" Obama said.

\"We have a great opportunity, coming out of some great conflict and tragedy, to really transform how we think about community law enforcement relations so that everybody feels safer and our law enforcement officers feel, rather than being embattled, feel fully supported.\"

CNN's Catherine E. Shoichet, Julie In and Ashley Fantz contributed to this report.