Police Find Chihuahua Drunk On Vodka, Rush Him To The Vet 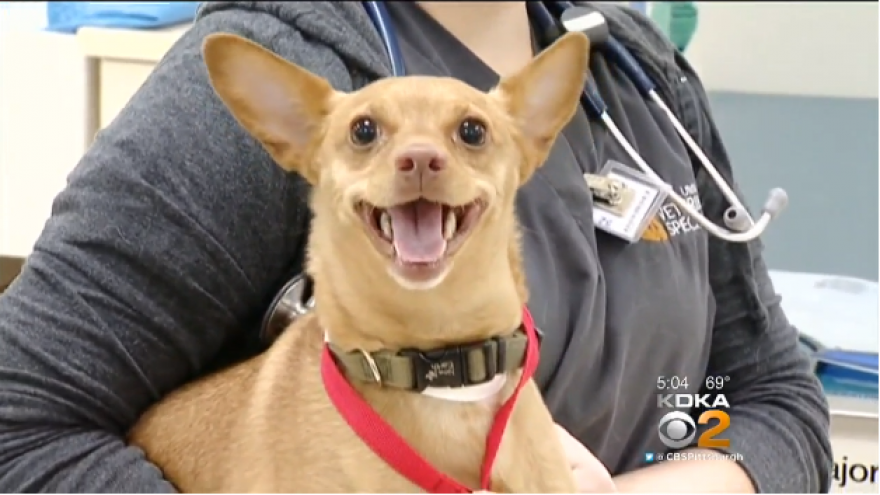 MCMURRAY (KDKA) — Three-year-old Maxwell, a 12 pound Chihuahua, spent the night at University Veterinary Specialists in McMurray after getting drunk on vodka.

“Last night when he was presented he was walking like a drunk person basically, his pupils were dilated. He was pretty confused about what’s going on,” Chief Veterinary Medical Officer for University Veterinary Specialists Dr. Dimitri Brown said.

Dr. Dmitri Brown has been caring for Maxwell since his stay and put an IV in his leg to flush the alcohol out of his system as fast as he could.

“At low dose not much of a risk, at higher dose they can go into comas and aspirate and develop pneumonia so it absolutely can be deadly,” Dr. Brown said.

Little Maxwell was dropped off at the vet by Bethel Park Police after they arrested Thomas Bloedel, 44, Thursday afternoon.

A neighbor on Cypress Drive in Bethel Park called police after reporting the Subaru he was sitting in hit a fence and pole. When police got to the scene, they say Bloedel was very drunk. He was sitting behind the wheel, had the keys in the ignition and his car running and in gear. Police found a bottle of vodka in his lap. It was open and spilling on him and pouring into the console of the car. He told police he also took two Vicodin. Maxwell was spotted drinking the vodka that was spilled in the console. Police say Bloedel threatened to shoot officers even though they say he didn’t have a gun on him.

“He’s doing really well. Super happy, playing outside, getting treatments and lots of care today,” Licensed Veterinary Technician Brianna Chilleo with University Veterinary Specialists said. “Felt bad for him, he looked really out of it worried and anxious and a little stressed out but knew we’d be able to help out and get him feeling better.”

Maxwell was picked up from the vet and taken to the animal control officer’s house to stay until further notice now that he’s medically cleared. As for Thomas Bloedel, he faces multiple charges including cruelty to animals, driving under the influence and terroristic threats. His preliminary hearing is scheduled for April 27.