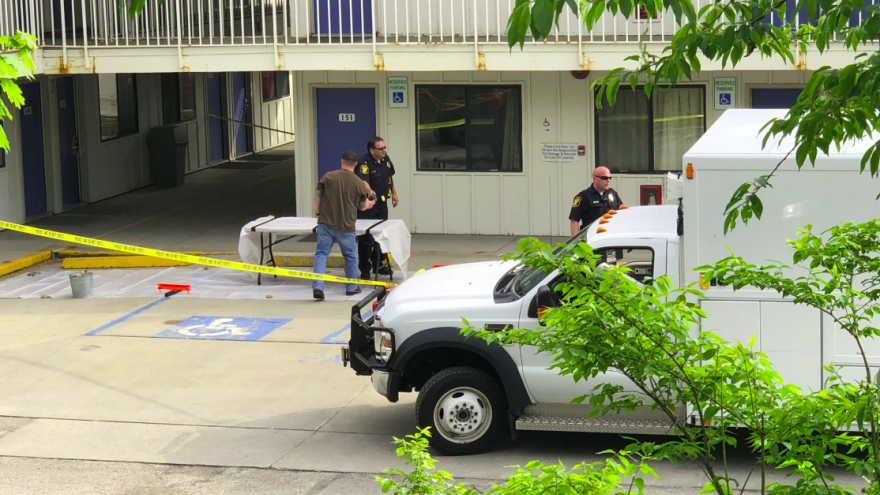 Law enforcement first converged on the Motel 6 in the 200 block of Beecham Drive around 4:20 p.m., setting up a perimeter around the parking lot and roping off a car.

“Through the investigation, it was determined there was an active meth lab in room 150 of this Motel 6. We did obtain a search warrant, and as you can see, we took all the precautions necessary,” said Lt. Jeffrey Korczyk, of Allegheny County Police. “It’s a very dangerous situation.”

Officers received a tip from a source around 3:30 p.m. and knocked on the room’s door. They said the female suspect answered the door and her 3-year-old child was also inside the room that smelled strongly of chemicals, similar to the smell of acetone, or nail polish remover.

“There was a 3-year-old child in the room, also, as well, so that’s something we’re looking into,” said Lt. Korczyk.

Officers tell KDKA they asked the suspect a few questions before leaving to obtain a search warrant for the room. After returning with the warrant, they say they uncovered countless materials allegedly used for the creation and redistribution of methamphetamine.

The officers then evacuated the nearby rooms and called in emergency services and HAZMAT crews to properly clean up the area and contain the chemicals.

At this time, police have not yet arrested the woman or released her name, but do tell KDKA that an arrest and charges are pending.

“I wouldn’t characterize it for personal use, it would be for redistribution and sale,” said Lt. Korczyk. “It’s kind of uncommon. We don’t see a lot of meth labs here. In my many years on the job, I’ve only seen really a handful.”

Police say the woman and her child were not in the hotel room when they returned with the search warrant, but they have since located her again.

The suspect’s parked BMW was also covered in police tape. Officers tell KDKA that is an active part in the investigation.

KDKA’s Meghan Schiller called the front desk of the motel, but no one answered the phone.

Meanwhile, police were working on finding the child a safe place to stay.