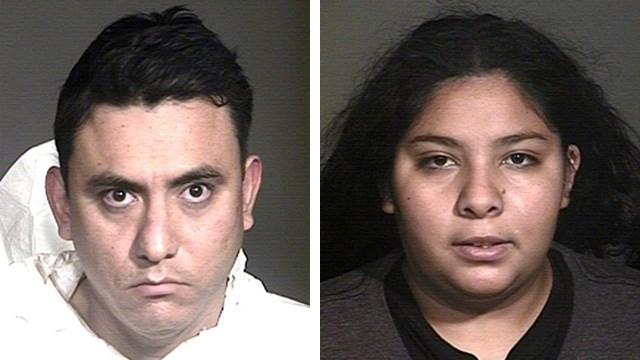 A man and woman were arrested Monday in connection with the worst case of child abuse Mesa police officers have seen in a while.

"This is just one of those cases that just shocks the soul," Mesa Police Chief John Meza said during a news conference Tuesday morning.

“Officers who responded to the scene were troubled by the conditions and having to witness this and without delay we have resources for them, also,” Meza said.

The 3-year-old child, who had allegedly been offered up for sex, was rescued Monday after authorities found her in a trash bag surrounded by feces in a closet. Her mouth, arms, hands and legs were duct taped, Meza said. She was also malnourished.

"The suspect wanted to have sex with other people and said he put the child in the closet because she was too loud," officers said.

The victim was found with many bruises, scars and blisters on her body, police said. "Neglect so harsh she could not stand on her own," Meza said.

Police said the child's mother, Mayra Yomali Solis, who is homeless, had been dropping the girl off with Fransico Rios-Covarrubias for days at a time over the past month.

Meza said Rios-Covarrubias had agreed to babysit the child while the mother went to work. Meza said Solis would stop by and see her child just one day a week.

Police said they were tipped off Monday morning after a man Rios-Covarrubias had met online for sex showed up at the apartment at around 7 a.m.and noticed a bad odor.

He also observed the child bound and gagged with duct tape kept inside a closet, Meza said.

“The suspect asked the responding party if he wanted to have sex with the child,” Meza said.

The other man became upset and left the apartment. He returned shortly and had consensual sex but told police he did not see the girl. He left and immediately called police.

When police arrived, they found the girl "was covered in feces wearing a diaper and T-shirt," Meza said. Officers removed the duct tape and she was taken to the hospital.

Rios-Covarrubias is accused of sexually abusing her, officers said. He confessed to duct taping the child, police added.

She was taken to a hospital for evaluation.

Officers said the homeless mother had shaved her daughter's head so she could claim she had cancer to collect money.

Solis also told police she admitted to knowing about her daughter's injuries but did not seek treatment. She said she believed the girl had fallen, Meza said.

“Fortunately the child was recovered before any more additional harm could be done to her,” police said in a statement.

Rios-Covarrubias was booked into jail on charges of sex trafficking, kidnapping, sexual conduct with a minor, along with child abuse.

"The arrest of any suspect involved in abuse or exploitation of any child is of the highest priority for the Mesa Police Department," police stated.

Meza said local law enforcement agencies still have work cut out for them in child sex and exploitation cases.

“It brings to light the efforts we need to continue on sex trafficking. It’s a problem that exists," Meza said.

“In this case, it was a combination of just evilness but also the fact that the suspect had offered up this child to the person who called to have sex with," Meza said.