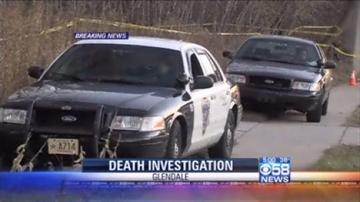 \"He was just a little unusual, but harmless as far as I'm concerned,\" McCormack said.

But someone may have harmed that neighbor.  Glendale Police taped off 65-year-old Peter Holzberger's home along  Port Washington Road Wednesday afternoon.  Police confirmed they were conducting a death  investigation, but have not said if the body is in fact Holzberger's.

\"He never caused me any trouble,\" McCormack said.  \"But he kept to himself.\"

Glendale Police arrested two suspects and are not looking for anyone else.  The Milwaukee  County Medical Examiner's Office confirmed they are treating the death as a homicide.

\"People watch out for each other around here and everyone was aware of Peter, but no one around here had wished him any ill at any time,\" McCormack said.

Neighbors called Holzberger a hoarder and said he had a yard littered with random things.   They say Holzberger called police in the past for people stealing from his property, which  wasn't well protected.

\"Easily accessible without any lights, any lighting at all or security,\" McCormack said.  \"I don't know if it  was just him that was singled out.\"

McCormack and others think Holzberger suffered from mental or emotional problems.  Neighbors  say friends of Holzberger's reported him missing over the weekend.  Now, McCormack fears  for the worst.

\"It's a shame if anything has happened to the poor guy,\" McCormack said.  \"I feel bad and i hope that whatever happened, they'll have some resolution.\"