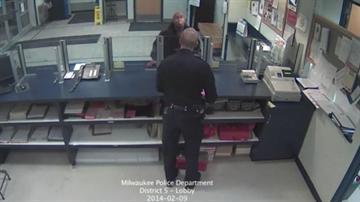 MILWAUKEE -- Milwaukee police arrested 28-year-old Larry Green after he spit into the eyes of a police officer inside a police station. Police say the incident took place around 8:15 p.m. on February 9, 2014.

Green went to Milwaukee's District 5 police station to complain about a family situation with police. According to police, an officer asked Green if they could help him and Green spit in the officer's face.

The Milwaukee County District Attorney's Office charged Green with throw/discharge bodily fluid at public safety worker. If convicted, Green will face up to 3.5 years in jail and $10,000 in fines.

The Police Union is using the incident to raise concerns about department protection for officer. MPA President Mike Crivello released the following statement:

\"In 2011 the Milwaukee Police Association requested review of safety

protocols relative to access to police stations... within budget

However, the upgrades were minimal - concern remained.

Since then there has been additional breaches while officer safety was placed in jeopardy.

In one incident  a crook actually jumped over the counter... this occurred at the same

location of the recent incident where an officer was spat upon.

Our officer's safety and security is at risk daily... at minimum they should

know they are secure within the station house.\"