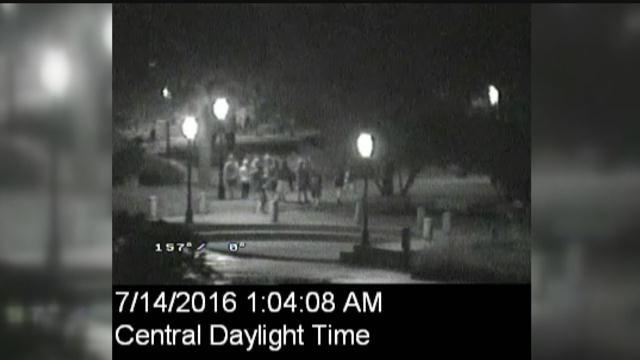 The city of Waukesha has a bit of a Pokemon problem.

Since the release of the app Pokemon Go Waukesha police have given more than 900 warnings to people in city parks past closing time, Captain Dan Baumann said Thursday.

Newly released surveillance video is also showing how wild the late night/early morning events can get.

In a video dated July 14, a small group of people is seen approaching the Fox River near Barstow Street just after 1 am.

You can see a group of people approaching with phones in hands. Police say it's safe to assume they are playing Pokemon Go.

One of the goals of Pokemon Go is to walk around and try to collect Pokemon - and some are more rare that other.

Authorities say the video shows the moment that someone either encountered or saw one of those rare Pokemon on the radar causing a stampede of people coming from out of nowhere.

"People just come running from out of nowhere and it is rather humorous. However, there is a safety aspect of it that we don't want people running into streams or tripping on curbs or running into the road just to catch whatever they need to catch," Capt. Baumann said.

"Officers in the beginning they were wondering what was going on. And they see this Pokemon Go app and they actually start stopping people down the street because they're all walking in and around the streets in not a safe manner with their eyes so fixated on their cell phones. And lo and behold they can tell when whatever pops up on their screen pops up because people just come running out of nowhere," Capt. Baumann said.

915 warnings have been given so far plus 5 actual citations for being in the park past closing.