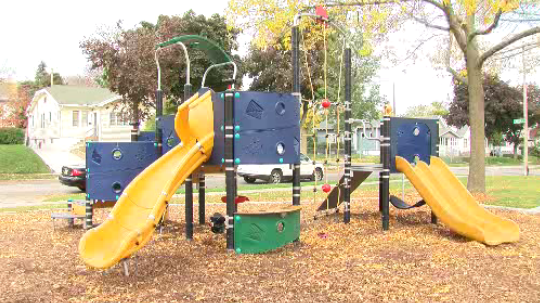 MILWAUKEE - A little boy killed by gun violence had his legacy restored today. City officials and MKE Plays rebuilt the Marcus Deback Playground on Wright and 55th. They made it into something everyone in the community can be proud of, especially his mother.

Lisa Ettienne almost cut ties with the playground named after her son. "Before all of this, I was just ashamed to drive past the park. I was discouraged that my son's name was attached to it."

But everything changed thanks to the support of the community.

"He would be so proud of it," Ettienne said, "I am happy to see his name attached to it and know there will be other kids even adults involved in playing."

Marcus Deback was playing basketball on that playground back in 1995. He was shot and killed helping another child get away from violence between two adults nearby. He loved the game so much, his mom says. When MKE Parks approached her about rebuilding it, she made sure the basketball courts stayed.

"He would be happy to see all the other activities. I don't know he was risk taker so he might be happy with that skyline. I could see him playing on that too."

The park is just one of 14 that will be redone in Milwaukee. MKE Plays and city officials have raised more than a million dollars to do so.

"You can have a public place that can have a negative asset, where people congregate there and do bad things. We want to make sure that's not occuring on this playground where we have young people using this playground from all different backgrounds and races," Alderman Michael Murphy said.

And Ettienne says the best way people who come here can honor her son is simple. "Channel your energy into play instead of violence."