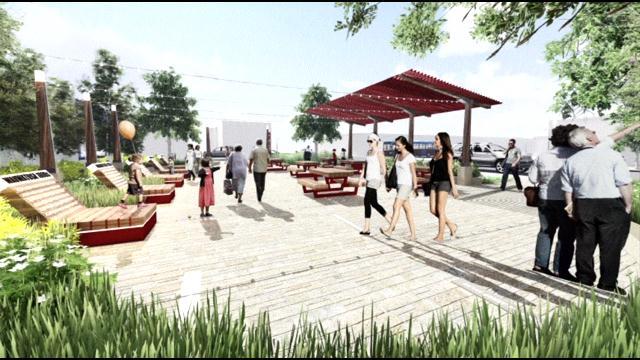 A small rectangle of concrete at 69th Street and North Avenue provides home for 16 cars. It's a home Sarah Hunt-Frank sees as wasted space.

\"it really is inefficient use of the space,\" Hunt-Frank said Thursday morning. \"Most of the space that is here is driveway.\"

It's an opinion Wauwatosa leaders have shared since the city developed a comprehensive East Tosa plan in 2010. Last year, Hunt-Frank and a steering committee made up of aldermen and Tosa residents began plans to redevelop the municipal parking lot into a \"pocket park.\" In working with the developer, Smith Group JJR, that process has cost the city $41,000.

\"We've been calling it kind of the 'Front porch of East Town Tosa,'\" Hunt-Frank said.

The park would replace the lot with benches, picnic tables and green space. It would also be lit at night.

\"I love the idea of people driving down North Avenue and seeing the people of this community supporting the businesses that are here,\" Hunt-Frank said.

By shifting parking to the north side of the park and behind a nearby building across 69th Street, the city would only lose two total spots.

But those are parking spots businesses like Shannon Trenholme's Rocket Baby Bakery, which sits next door to the parking lot, rely on.

\"A pretty park next to our place wouldn't hurt,\" Trenholme said. \"We think it's pretty, great. But what our customers really want and our neighbors, more importantly, is parking.\"

\"It's not one or two cars, I mean, we need to find where one or two hundred cars can park,\" Milan said. Milan says it's often a struggle just finding space to put the garbage carts out at the street.

The 19-year Tosa resident admits the park will make North Avenue look even better. But she says eliminating any parking while developing successful businesses is a formula the city can't sustain.

\"I think [city aldermen] have a big problem that they don't know how to solve,\" Milan said. \"So, while I think they may be hearing, they may not be listening.\"

A Wauwatosa official told CBS-58 news there \"aren't any successful neighborhoods in the world that don't have a public gathering space.\" He says the project adds real value to the area.

The common council approved the developer's final plans Tuesday night. The next step involves putting out designs for construction bids, which the council would need to approve.

Wauwatosa's development director, Paulette Enders, tells CBS-58 News construction on the park could start spring 2016. She says it's too early to say how much construction would cost.