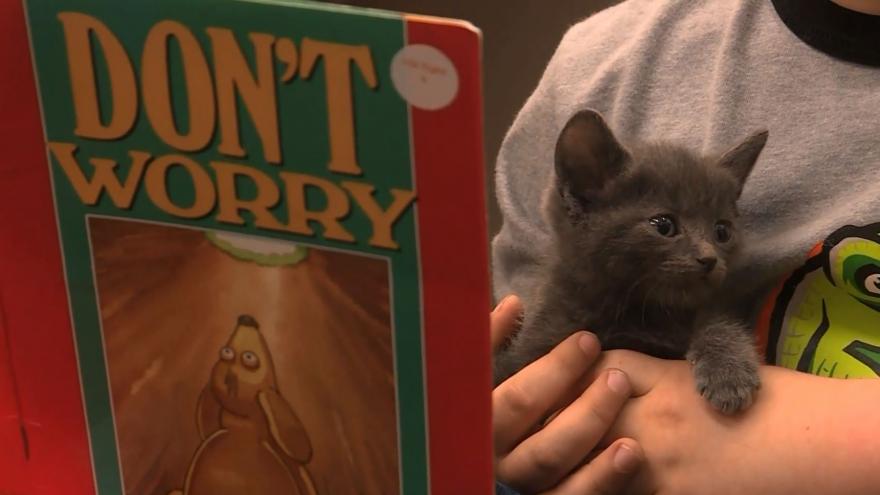 The six-week pilot program is geared toward helping the students build confidence in their reading skills.

A pilot program at Adams Elementary in #Janesville is helping students become better readers by letting them practice reading to kittens from the Humane Society #news3pic.twitter.com/Nr4RB5ny3k

The idea for the Reading Time with Shelter Buddies program came from Simmons and her Leadership Development Academy team. It’s similar to a program in place at Washington Elementary School in Janesville, in which students read to the cats at the Humane Society of Southern Wisconsin. Simmons said transportation is an issue with that program, so their idea is to bring the cats into the classrooms.

“The biggest thing I’ve noticed in the students is the confidence,” Simmons said. “It’s not just reading with them and socializing. They’re able to spread the word that these animals need homes.”

The students look forward to reading to the kitties every Thursday.

“They feel like a little fluffy ball,” said second-grader Jarrod Brehon. “I think they listen, but sometimes they just want to look at something else.”

Second-grader Cooper Endres said his favorite part is petting the 6-week-old kittens. Brett Frazier, the executive director of the Humane Society of Southern Wisconsin, said being with the students helps the cats get ready to be adopted. He said the Humane Society adopts out around 700 kittens a year.

“Exposure to people is a huge part of taking a kitten born in the wild and turning them into a household pet,” Frazier said. “So, the more time we can get them around people, and especially with little kids, that’s better for their chances of living a happy life in a house.”

The pilot program runs for two more weeks. After that, Simmons’ Leadership Development Academy team will review the data it has collected and put together a program plan for other schools to use. She hopes to make the program available for all schools in Rock County by the time school starts in the fall.