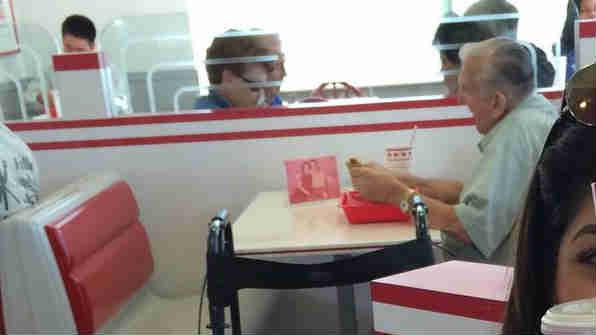 A photo of a California widower eating dinner at a restaurant with a picture of his late wife has gone viral.

A fellow diner at an In-N-Out Burger in the Bay Area tweeted a picture of an elderly man after spotting the framed photograph on the table in front of him.

The original photo has already been retweeted nearly 9,000 times.

CBS station KPIX in San Francisco discovered who the man is: John Silva, who lost his wife Hilda five years ago.

Silva met the woman who would become his wife in 1944, when he was just 17 years old, while playing minor league baseball in Massachusetts.

\"I don't know how many players can say they met their wife at a practice,\" family friend Lorena Ippolito told KPIX. One of Silva's teammates threw him the ball, but he missed.

\"The ball rolled across the field and made its way to Hilda's feet, and then John took one look and said that's it,\" Ippolito said. \"And he told her, 'I'm going to take you out. I'm going to marry you someday.'\"

That day wouldn't come until a decade later. Silva was making a delivery to his boss' house and noticed a familiar face,

\"He said, 'I recognize the picture on the wall,'\" Ippolito said Silva told her. \"'That's the girl I've been looking for ten years.'\"

The two were married a year later, and eventually moved to the Bay Area.

Silva still goes to the couple's favorite places, including an Olive Garden in Fremont. The restaurant has a plaque and picture of them hanging over the table they loved. When he dines, the picture of Hilda keeps him company.

\"She's always there with him,\" Ippolito said. \"It's like they're not really separated.\"

It's a love story that's stood the test of time.

\"In the electronic age, there's just not a whole lot of romance unless it's on TV, and then somebody like this comes along and reminds you,\" Ippolito said. \"I hope I got even half of what they had.\"