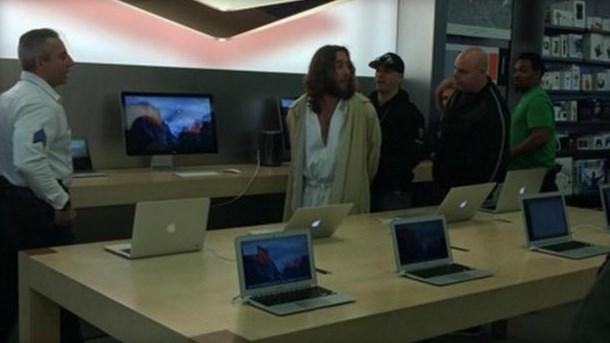 (CBSNEWS) -- A downtown Philadelphia fixture known as "Philly Jesus" was arrested Monday night in an Apple Store after a dispute over a cross he brought into the business, according to news reports.

The 29-year-old man, whose real name is Michael Grant, regularly dresses up like Jesus Christ, hangs out in downtown Philadelphia and introduces himself to passersby as "Philly Jesus," reports Philly.com. He preaches on sidewalks and has performed baptisms in the Love Park fountain, according to CBS affiliate WHP.

Grant also sometimes carries a large cross with him, and that's what landed him in trouble at the Apple Store Monday.

WHP reports that a manager at the Apple Store asked him to leave because the cross he was carrying was blocking an aisle. Grant allegedly refused, and staff there contacted police. He was arrested and charged with defiant trespassing and disorderly conduct.

Images of Grant dressed like Jesus as he was being cuffed were widely circulated on social media. Philly.com reports he was released after a Tuesday arraignment.

In a tweet, Grant said he was persecuted for his faith.

Philly.com reports Grant had been previously arrested for refusing to leave Love Park, but the charges were later dropped. His next court date on his latest arrest is set for May 17.