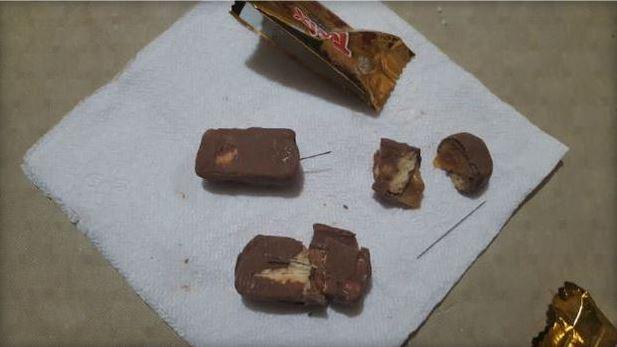 On Sunday afternoon, they said a 12-year-old child turned in a Snickers bar that also contained a similar sewing-type needle. The child had been trick-or-treating in the same area as the other children who reported tainted candy, whose ages range from 7-12.

Police say they were notified at midnight Sunday from someone claiming that chocolate candy bars handed out in the Stenning Hills area of the borough had been tampered with, according to CBS Philadelphia. Authorities say sewing-type needles were found inside five wrapped Twix Candy bars given to four different children who had been trick-or-treating door to door in the area of South Union Street and West South Street.

The man told authorities he had seen a post on Facebook from an unknown source describing their Snickers candy had needles in it. Reading the post prompted the parent to check his own children's candy and he discovered the needles in the snack-size Twix candy.

There were no reports of any injuries caused by the tampered candy.

Police are urging parents to check all Halloween candy before allowing their children to eat it. They're also encouraging people to check any leftover candy for tampering.