Pedestrain struck and killed on I-43 in Waukesha County 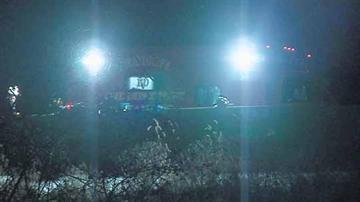 WAUKESHA COUNTY-- Waukesha County Sheriff deputies responded to the scene of a person struck by a car along I-43 in the town of Vernon around 6:00pm on Friday.

The Waukesha County Sheriff Department says a 48-year-old man was found dead outside of his vehicle.

Officials believe that the victim was struck after his vehicle became disabled on the shoulder before the accident.

The driver of the striking vehicle is being interviewed by authorities.

All southbound lanes were blocked  beginning at  WIS 164 to I-43 southbound ramps for fours hours. Traffic was diverted off at WIS 164.