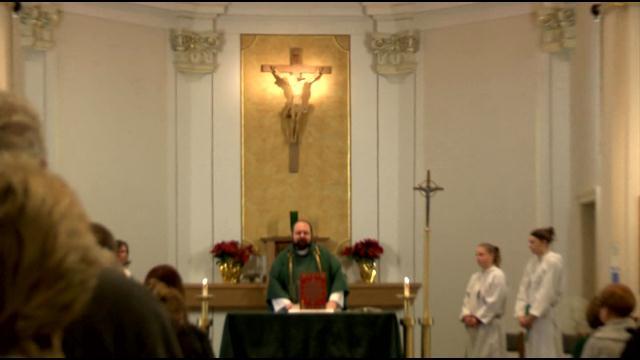 Members of a Catholic church in Caledonia are mourning the loss of two long-time parishioners.  The deadly accident happened Saturday outside St. Louis Catholic Church. The couple was leaving church when they were hit by an SUV.

\"It's just so sad to hear this. Its kind of devastating to our parish,\" said church member Madelyn Rehberger.

It's with tears and grief that Father Mark Danczyk delivered his message to St Louis Catholic Church.

\"They were the salt of the Earth,\" said Father Danczyk.

That's how he describers 83-year-old Oscar and Vernetta Lang.

The couple was killed after leaving while they were walking to their car. The driver, a 32-year-old woman, had her two children in the car at the time.

Father Danczyk said he saw the couple's bodies laying on the road. A sight that will forever be etched in his memory, \"The 4 empty shoes in the middle of the road,\" said Father Danczyk when describing the scene.

The priest said there are plenty of lights outside the church for pedestrians and drivers.

Police tell CBS 58 they don't believe alcohol was a factor. They also tell us the driver is cooperating with the investigation.

\"I hope the people involved will heal,\" said Rehberger.

Father Danczyk was there for the Langs during their last moments and said he will remember them being kind and loving.

\"They truly loved each other and you could really sense that,\" said Father Danczyk.