Packers vs Vikings: A Home Divided in Green, Gold, and Purple 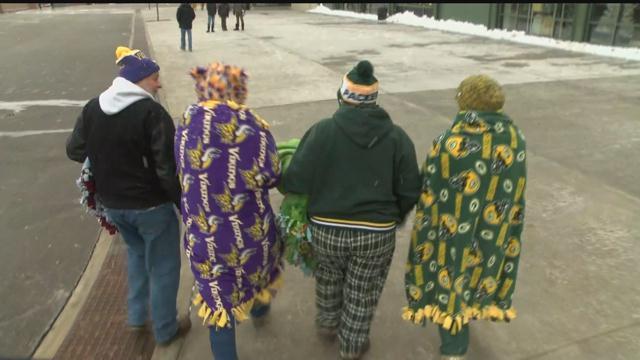 Snow is on the ground in Green Bay and and flurries even threatened to continue into the evening's Packers game. But none of that was cooling-off the rivalry between Packers and Vikings fans.

At Lambeau Field there was plenty of green and gold - but also a fair amount of purple as Minnesota fans flock to the stadium. The 7:30 p.m. game was coming off a tough loss for the Packers the previous week and this rivalry game could  be the place where they can find some redemption.

But for some families visiting Green Bay - this is actually a competition that lasts all season.

Under the statue of Vince Lombardi fans mingled for hours before game time. Everyone's cordial, but for the Amy family it requires a little more effort.

"Her family, she's grown up in a Packers family. And I can't convert her," Conrad Amy said about his wife, Chris.

"I've learned when to keep my mouth shut. At a certain point I know I just gotta be quiet," Conrad said.

The family is decked out in gear supporting their teams. Their mismatched entourage was noticeable.

"He watches all the games. I listen to 'em when I'm on my way home," Chris Amy said.

"She goes to work so I can have a beer during the game," Conrad said, half-joking.

"My mom's a lot more vocal about being a Packers fan," Stephanie Copeman, dressed in Vikings gear, said.

"And [Jennifer is] the youngest so I think she was just trying to suck up a little bit," Copeman said.

"Nope. No, I've been green and gold since I was born," Copeman's sister, Jennifer Aden, said.

Wrapped in opposing tie-blankets it's the first time to Lambeau for all of them. The family - from the Rochester, Minnesota area - doesn't hide their disagreement which they say happened naturally.

"They decided on their own which one they were going to be. Then we took sides on the couch," Chris Amy said.

"So I just stick with my dad so he has some support - is why I originally started cheering for the Vikings," Copeman said.

They're certainly not alone in their situation but they do get a lot of stares around the stadium due to their bombastic fashion choices.

Their willingness to put up with each other could be a sign of maturity...

"He's tried to hide all my packers stuff," Chris said.

...or maybe more likely, it's love for one another that allows them to get along. And as we enter 2016 the fight for the next generation continues.

"She says that her kids are both Packers fans but I'm pretty sure my nephew just say it because she sucks up to his mom," Copeman said.

"Well my husband is a Vikings fan so it could probably be another split home," Aden said.