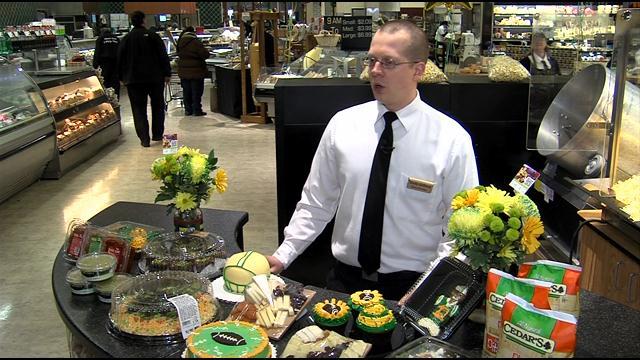 For many local fans, the prep-work for Sunday's Packer game begins now. If you're not heading out to the game in Seattle there's a good chance you're heading to a place like Ray's Wine and Spirits to pick up all your party supplies. And the local businesses we've talked to say they're ready for business.

What's a Packer party without cheese? Or brats? Or beer? Those items are flying off the shelves at local grocery and liquor stores.

\"The burgers and brats go, but then you have your winter items. Everyone loves chili. Who doesn't want a bowl to snack on the entire game?\" said Andy Gifford, store director of the Milwaukee Metro Market.

Fans we spoke with say, they're cooking up a storm for this game. \"We're doing a southwest chicken chili. But my husband just reminded me today, its going to be Seahawk chili' said one fan. Another said, \" We're doing beer cheese soup, beer cheese dip and some sort of meat product.\"

And grocery stores are making it easy for fans, grouping everything they need in one spot. But it's not all about food. Grocery and liquor stores agree their beer sales go up, way up, during games. The shelves are stocked today and Metro Market says they intend to keep it that way. \"We will stock continuously. You should see our beer cooler. We are not running out,\" said Gifford.

Kaleb Schwecke from Ray's Wine and Spirits says beer is the Wisconsin way, \"It's so crisp that it does pair well with food, you got cheese dips, hard cheese, things like that. Any game day stuff, it's easy to wash down good game day grub with it.\"

Sunday is typically the busiest day for grocery stores with fans coming out to get their last minute party items. \"All departments are ready, they ordered heavy going into this. We have a lot of stuff in house. We are going to make sure everyone has what they need to make their Packer parties happen.\"