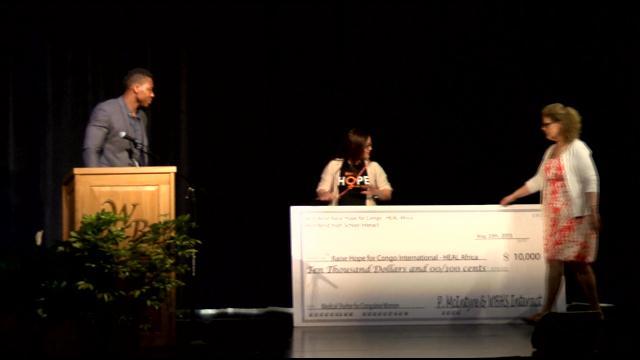 The students raised $10,000 for the organization \"Raise Hope for Congo,\" which is dear to Mulumba's heart.

Mulumba was born and raised in Congo. Despite all the conflict in the African country, Mulumba has great memories of his native home and tries to give back as much as he can.

\"I have lived in Congo and I know how much any kind of donation can mean to my people back in Congo,\" Mulumba said.

The 25-year-old received a warm welcome during an assembly at West Bend West High school Wednesday morning. He was invited to accept the $10,000 check on behalf of the organization \"Raise Hope for Congo.\"

\"It's a great honor to be here,\" Mulumba said. \"To receive this from a high school in West Bend, a city I've never been to, it's incredible,\" he added.

The donations have been a work in progress for the last four years, thanks to teacher Patricia McIntyre.

\"We are overjoyed to be able to do this,\" McIntyre said, who introduced the students to the organization and the issues that women in that African country face on a daily basis.

\"Sexual violence is the number one weapon in congo. Because rape is not punished in Congo, the way that it is in the United States, the women are first brutalized and then rejected,\" McIntyre said.

The students sold T-shirts to raise the funds that will cover the costs of building a shelter for women who are victims of sexual violence.

\"With $10,000 of American money, they can house 6 to 8 women in clean safe facility, where they will receive psychiatric services, medical services and know they will be safe,\" McIntyre said.

For Mulumba, it's a gift he'll never forget.

\"There's hospitals there, but there's not enough shelters for women to be in, so raising money for a shelter for these women will be a great effort,\" Mulumba said.

Mulumba encourages others to follow the efforts of students in West Bend. If you'd like to make a donation to \"Raise Hope for Congo\" visit their website here.