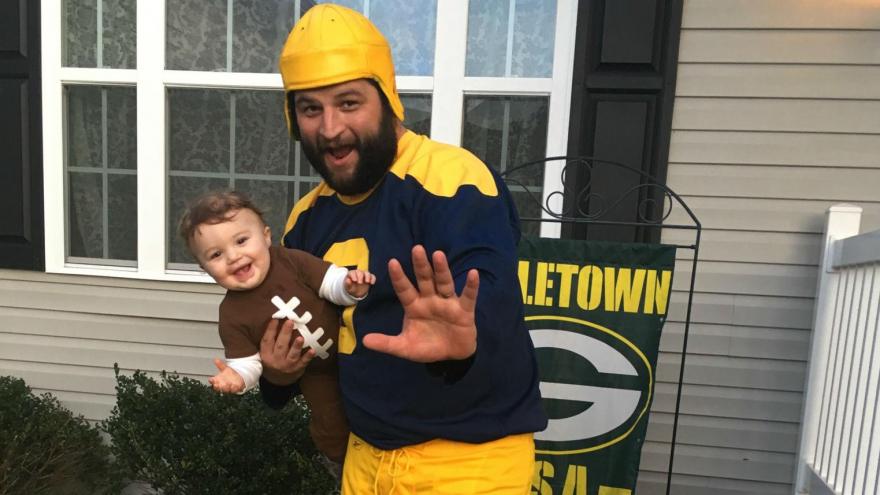 The Green Bay Packers again this year offered fans the chance to have their photo printed on more than 80,000 game tickets through the “Packers Ticket Takeover Contest.” After thousands of entries and more than 50,000 votes in the contest, Ryan Messatzzia of Delmar, DE, was chosen as the winner.

Messatzzia’s photo of himself and his 1-year-old son, Miles, will be printed on the tickets for the Fan Appreciation Game against the Minnesota Vikings on December 23.

The contest, brought to fans by American Family Insurance, ran from March 10 through April 28, and invited fans to submit a photo for a chance to have it printed on game tickets.

A panel of Packers officials chose the top five photos, and those five were posted on packerseverywhere.com to be voted on by fans. Messatzzia’s photo had the most votes in the contest and was named the grand prize winner.

Messatzzia grew up in New Jersey and became a Packers fan in 1992 after seeing Brett Favre throw a game-winning touchdown pass to Kitrick Taylor to beat the Cincinnati Bengals. Later that week, he visited the local library to find every book, magazine and article about the Packers he could find and became a fan for life.

The photo features Messatzzia dressed up in a Tony Canadeo jersey holding Miles, who is dressed up as a football, during Halloween of 2016.

“Miles is my hero. He is the most resilient person I know,” said Messatzzia. “He was hospitalized twice during the first three months of his life, the second being for respiratory failure. We almost lost him, but he has bounced back like a champ.”

Messatzzia said that following his wife’s maternity leave, he was able to take family medical leave from his job as a professor at a local community college to care for Miles for several months. He worried about his son getting sick again, and to help ease the stress, Messatzzia started a tradition he called “Miles’ Monday Movie Madness.” The two would watch a movie or TV show together each Monday and Messatzzia would dress Miles up as one of the characters from whatever they watched.

“It was a cool way to bond with my son, who I found out was very tolerant of my shenanigans,” said Messatzzia. “It seemed a natural fit that he would be my ‘football’ to hold for our Halloween trek around our community.”

In addition to having his photo printed on approximately 80,000 tickets for the 2017 season’s Fan Appreciation game, Messatzzia and his family will receive tickets to the game, including hotel and flight accommodations.

Voters in the contest this year also were entered to win a signed Packers jersey each time they voted. The winner of the jersey is Lisa Liebgott from Roscoe, IL.