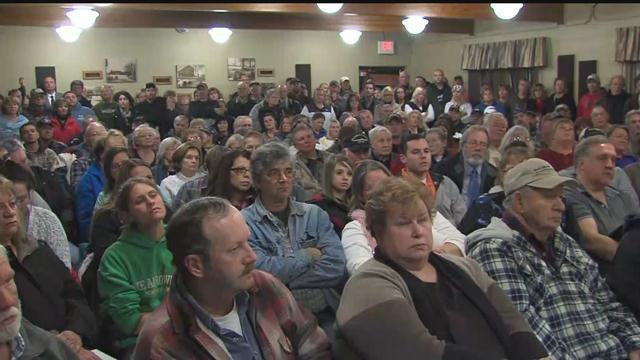 He was convicted of sexual assault and attempted homicide in Milwaukee County, and now Clint Rhymes could be placed in a small community about an hour north of the city.

"I don't really think I could say what I really feel, because I would probably be in jail myself. I work at the DOC and these violent sex offenders? You do not rehabilitate them," one resident of the small town of Eldorado said.

Hundreds of residents attended a community meeting Monday night held by the Fond du Lac County Sheriff about the impending placement of Rhymes in their community.

His past convictions include second degree sexual assault & attempted murder.

"How are we going to be safe? And as the sheriff says, just in case something happens, they're not going to be able to be there quickly," said Bev Haag, who lives near the home that Rhymes is slated to live in.

It's a move that Fond du Lac County Sheriff Mylan Fink Jr. is very much against.

"I live by the common sense doctrine. I can't tell them I can protect them from sex offenders coming in that are planted in their neighborhood,
Sheriff Fink said.

But it's also a move he can't stop.

Rhymes was originally supposed to be placed in a home on the south side of Milwaukee, but that was stopped when Milwaukee Alderman Tony Zielinski pointed out that it violated a city ordinance.

"There is an ordinance that precludes serious sex offenders from being located within 2,000 feet of a school, park, or playground or daycare center. So he never was supposed to be put in there," Alderman Zielinski said.

Because no landlord would willingly take him in Milwaukee County, the Wisconsin DHS opened up a statewide search and found one in Fond du Lac County.

And that's what Sheriff Fink has a problem with, saying that offenders need to stay in the communities where they have committed a crime.

"What I'm hearing from the Milwaukee area, and I'm not trying to pick a fight, is not in my backyard," Fink said.

Rhymes is currently in a facility near Madison. Sheriff Fink is not sure when he will be released, and with all the uncertainty, he is asking people to write letters to the judge in the case to keep Rhymes out of his community.