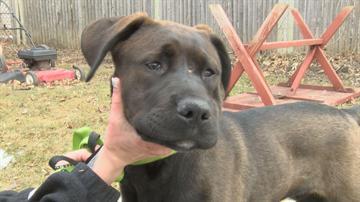 RACINE -- Moose the dog looks like a happy, healthy puppy.  But earlier this week he ended up in a vet's office with a broken nose.  Now his owner wants justice.

\"I want to find who did it,\" owner Nikita Wallin said.

Wallin let her Moose out in her fenced yard in Racine Wednesday morning. She says when Moose came back to the door a short time later, he had blood on his nose and face and this gash  near his eye.

\"When I went to go pet him the first time he flinched,\" Wallin said.  \"He is a very sweet, playful puppy.   There's no way, he's never afraid of anybody.\"

Wallin went out in her yard and found her gate was open and some of the bricks nearby were bloody and out of place.  She immediately called police.

\"They told me to get a security system and that there has been a few incidents around the area due  to it being spring break and unattended kids,\" Wallin said.

CBS-58 spoke to Racine Police over the phone Saturday.  They wouldn't confirm any other incidents in the  area.  Horlick High School and a grade school are just a few blocks away, leading Wallin to believe a child is responsible.

\"Parents need to have a serious talk with them,\" Wallin said.  \"Because if it's starting out with animal cruelty,  it leads to other things when they grow up.\"

Wallin says Moose's wound swelled up like a goose egg.  The vet treated him for a broken nasal cavity and gave him sedatives and pain medication.  Wallin says the dog hasn't been the same since.

Police plan to keep an eye out in her neighborhood, but Wallin just hopes someone knows something.  You can reach Racine Police at 262-886-2300.