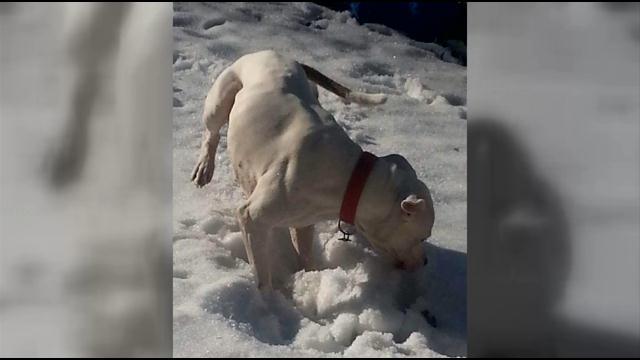 We're hearing from the owner of a pit bull that died after attacking a woman in Dodge County.

Police say frosty got out of his fenced yard and bit a 53-year-old woman and her dachshund while they were walking yesterday.

CBS 58 spoke with the dog's owner in Reeseville exclusively.

\"It's not right. It's not their fault people gave them bad reputations and made everyone so scared of them”, said the dog's owner Elsia Acevedo.

Elsia Acevedo is mourning the death of her 3-year-old pit bull Frosty.

\"I understand the guys were just trying to protect someone”, said Acevedo. “I probably would have done the same thing too to a certain extent because you can feel when something stops breathing. They could have got off my dog.\"

The dodge county sheriff tells CBS 58 a 53-year-old woman was walking her dachshund on North Main Street Thursday morning, when frosty jumped his owner's backyard fence and ran at them.

Two men saw the attack, and got on top of the dog to restrain him.

By the time owner walked outside of her home, and over to this front yard, she had found the dog unresponsive.

\"They were both on him with all of their body weight”, said Acevedo. “My dog was not moving at all. I just think they used just a little bit too much force.\"

The 53-year-old victim suffered several bite marks and cuts and taken to the hospital for serious, but non-life threatening injuries.

\"I feel bad for the lady that got bit, and her animal”, said Acevedo. “I understand she was probably really scared when she seen my dog.\"

The sheriff says without the two men stepping in to help, their injuries could have been far worse.

CBS 58 tried reaching out to the lady who was attacked, but did not have any luck getting a response.

The Dodge County Sheriff's Office did not release the names to the two men who help the 53-year-old woman, and her dog.