Over 60 horses locked up left behind in California fires 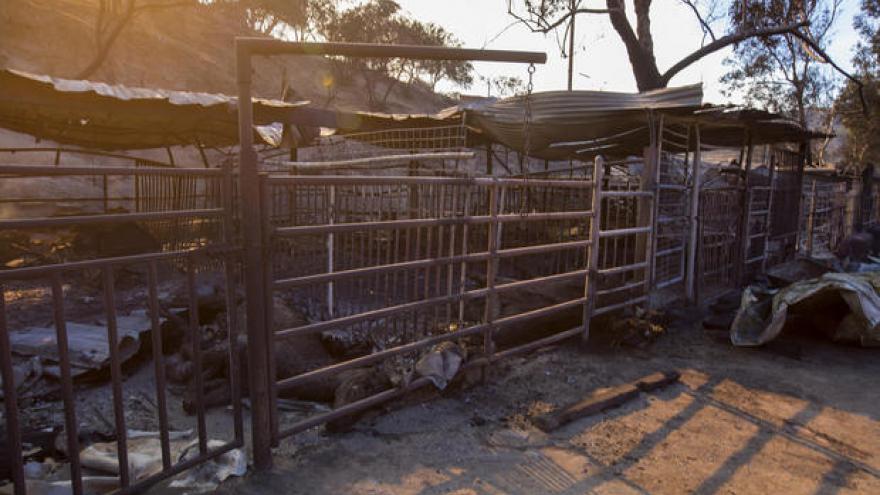 (CBS News) -- By 4 a.m. Tuesday, Virginia Padilla's ranch was in the direct path of the fast-moving Creek Fire in Southern California. Padilla and her family in Tujunga awakened to thick smoke and bright orange flames. Fire officials alerted them to evacuate.

The family packed up some belongings and rushed away from the flames, leaving over 60 horses locked inside stables at the ranch behind. Los Angeles Animal Control workers sprung into action, managing to successfully lead 15 of the animals to safety.

But when Padilla returned to Rancho Padilla after the danger passed, she found a devastating sight — the charred carcasses of dozens of horses, trapped in their stalls.

"It's awful. There's no words to explain it," Padilla told CBS Los Angeles.

Padilla did not confirm the condition of the other 45-plus horses that were being boarded at the ranch to CBS Los Angeles. But her younger sister, Patricia, told the Los Angeles Times Wednesday there were at least 29 dead.

Many of the horses that survived suffered serious burns, like Padilla's 7-year-old Ruben. The horse was burned over 65 percent of his body, but he is expected to recover.

"I'm very fortunate he's alive … because, I mean so many people have lost their horses. … I feel for those people, to be honest," Padilla told CBS Los Angeles.

Over 200 horses and other animals in the path of the Creek Fire were taken to Pierce College in Los Angeles, where veterinarians are providing care and treatment. On Tuesday night, Los Angeles Animal Control announced Pierce College was at capacity.

"The Los Angeles County Department of Animal Care and Control (DACC) has been working around the clock to rescue animals and provide safe sheltering for animals as a result of the active fires that have affected thousands of Los Angeles County residents," the agency posted in an update on Facebook Wednesday.

With the help of several volunteers — including a CBS Los Angeles reporter and cameraman — 150 horses at a nearby ranch in Sunland escaped the same fate.

As the Creek Fire engulfed the stables at Gibson Ranch on Wednesday, people scrambled to lead the horses out of danger, and none suffered any injuries.

However, the owner, Dale Gibson, lost almost everything he built.

"It's been crazy and painful," Gibson told CBS Los Angeles. "I don't know, don't know if I … everybody says rebuild. We've done a lot of stuff here, a lot of charity stuff. There's 19 years of work here."