Over 200 Nigerian Schoolgirls Are Still Missing 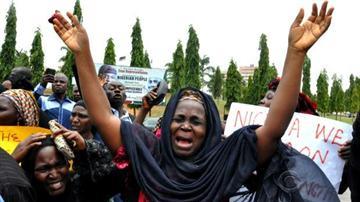 (CNN) -- Protesters took the streets again Sunday, adding to the international pressure on Nigeria do more to rescue more than 200 schoolgirls abducted by militants.

Crowds from Los Angeles to London rallied on Saturday, carrying posters reading #BringBackOurGirls -- a campaign that began on Twitter after the mass abduction of the girls by the Islamist militant group Boko Haram last month. In Washington, protesters gathered at the Lincoln Memorial to denounce what they described as a poor response by the Nigerian government to rescue the girls.

On Sunday, about 100 demonstrators gathered outside the Nigerian High Commission in London again, where they chanted \"Bring them back!\" as well as \"Not for sale!\" and \"African lives matter!\"

The mainly female crowd, from young girls to older women, also carried banners that read \"These are our sisters\" and \"No child born to be taken.\"

\"It's very important that everyone do something,\" London teacher Leyla Chery, who attended the demonstration with her 8-year old daughter, told CNN. \"We have ways to find the girls, but we haven't done enough and the government in Nigeria hasn't done enough. So we should definitely try to push them. I talk to my students in class about the girls.\"

The social media campaign has gained momentum with celebrities, such as singer Mary J. Blige, offering their support. Education advocate and Nobel Peace Prize nominee Malala Yousafzai, the Pakistani schoolgirl who made a miraculous recovery after being shot in the head by the Taliban, posed in a picture with the #BringBackOurGirls poster.

On Saturday, U.S. Secretary of State John Kerry called on Nigerian President Goodluck Jonathan to step up efforts to find the girls, who were kidnapped April 16 from a school in Chibok, in the country's rural northeast.

Anger has been mounting in Nigeria over the lack of information about what efforts are under way to secure the girls' release. Many contend authorities are not doing enough and have taken to social media using hashtags #BringBackOurGirls and #BringBackOurDaughters to demand more from the government, a move that appears to have ignited a global call for action. Nigeria's Defense Ministry has said it is committed to the search.

Jonathan's office said he would take questions about national issues, most likely to include the mass kidnapping, in a televised media chat later on Sunday.

In London, Matilda Egere-Cooper, one of the organizers of Sunday's protest, said she wanted to raise awareness about the \"disastrous\" situation in Nigeria.

\"I think its so important that the Nigerian government do a lot more in finding these women,\" Egere-Cooper, herself of Nigerian origin, told CNN. \"We are here today to lend our support in making sure that the girls are returned to their family. We also want to bring attention to women being in the center of various conflicts, wars that are happening around the world. We don't think it's right.\"

Speaking during a visit to the Ethiopian capital Addis Ababa, Kerry called on the government to bring those responsible to justice.

\"The kidnapping of hundreds of children by Boko Haram is an unconscionable crime, and we will do everything possible to support the Nigerian government to return these young women to their homes and to hold the perpetrators to justice,\" he said.

Boko Haram's name translates to \"Western education is a sin\" and the group especially opposes the education of women. Under its version of Sharia law, women should be at home raising children and looking after their husbands, not at school learning to read and write.

According to accounts, armed members of Boko Haram overwhelmed security guards at the all-girls school in Chibok, pulled the girls out of bed and forced them into trucks. The convoy of trucks then disappeared into the dense forest bordering Cameroon.

On Friday, Nigerian authorities updated the number of girls kidnapped to 276. At least 53 of the girls escaped, leaving 223 in the hands of their captors, police said.

Authorities said that the new figure for missing girls -- 223 -- could grow as police fill in spotty school enrollment records.