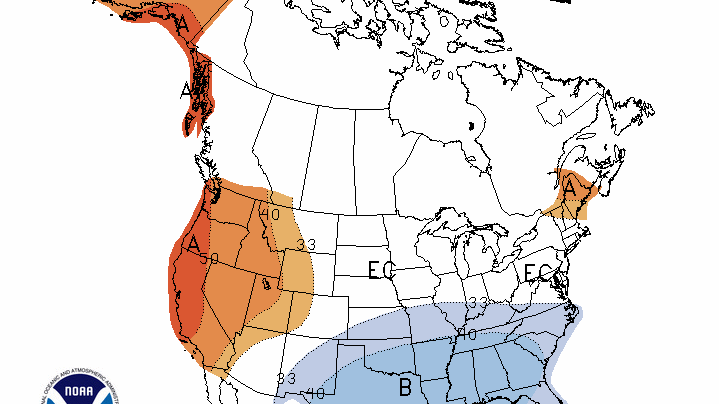 December record warmth in Wisconsin is not too impressive.  Did you know that we set a record warm minimum Sunday and Monday?  Our morning lows were 44° both days in Milwaukee.  The previous warmest low for both days was 40°.  You combine that with the clouds and fog and that is why record lows are not impressive, most of the time, during our winters.

Our mild, or record breaking temps, depart today.  A cold front passes Tuesday and temperatures fall back to near normal by Wednesday.  Speaking of normal, Milwaukee average high and low temperatures are 32° and 19° for the rest of the week.

The intensity of our warmth is cut for the remainder of the week.  Temperatures are forecast to be at or slightly above normal.  The Climate Prediction Center (CPC) forecasts above average temperatures days 6 through 10 and 8 through 14.  That forecast takes us through Christmas and towards New Years.

On both of those maps, Wisconsin is located in the orange or red shade.  Our percent chance of seeing above average temperatures falls from near 60% in the first graphic to 33% in the second graphic.  My personal experience with CPC forecasts is that they are more reactive.  In other words, they are late to forecast changes in temperature and precipitation.  And that looks to be repeated for the remainder of the month.

Here is what I mean.  Over the last 7 days, three widely used computer models have indicated colder temperatures returning to the central United States around December 20th and 21st.  So, a Meteorologist could have recognized a possible change almost two weeks prior to this change, which has not happened, yet.  Why am I confident in this drop in temperatures?  Well, there are a few things that catch my eye:

So, what does this look like?  Here is an image of the operational and ensembles.  I have shrunk the image.  So, you probably cannot see the exact date and time, but that is not the point.  Note how similar all three are.  They have been similar for nearly a week.  For those of you that have to know, the date is December 24th at 12Z.  That is 9 days from the publish date of this article.  Forecasts this far out should never try to predict specifics.  At 9 days, heck 7 days, and out, trends are what you look for.  If you find someone on the internet trying to forecast specifics - rainfall/ snowfall with exact high low temps 10 to 14 days out, they are selling you swampland in Florida. (Disclaimer: Now, I know some of you are saying, \"Hey, but you give a 10 day forecast!\". Yes we do, but we always mention the last three days in generalizations.  For example, Day 9 might show 38°, but we say,\" temps in the upper 30s.\")

Is there a reason not to be confident?  Yes, the jet stream over the Pacific is strong and computer models have a difficult time forecasting weather out over the oceans - there is a lack of data due to the fact that radiosondes cannot be launched.  Radiosondes are weather balloons, launched twice a day around the world.  They measure many variables as they climb through the atmosphere.  Those variables are the raw data ingested into the above computer models that initiate the forecast process.  Missing that void over large portions of our planet can create big problems with forecasts.

In conclusion, after a November with temperatures 6.6° below average, December, to date, has averaged 2.7° above average.  The rest of December favors temperatures average to below average from December 20th through the end of the year.  Cooler temps mean there is a still a chance for a White Christmas.  That is an article Morning Meteorologist Rebecca Schuld will handle later this week.

As always let me know what you think.  If you have a question, email me at mmcginnis@cbs58.com or on Facebook.  I can answer your question or maybe use it as a topic for a future blog.