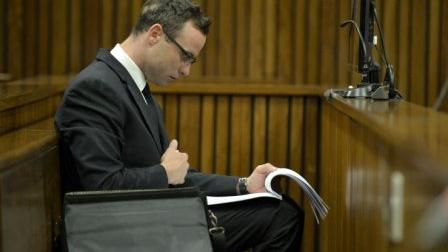 He was the \"Blade Runner,\" the miracle man and the Paralympic athlete that could take on the very best able-bodied competitors.

It was a high-profile career that inspired millions, earned lucrative sponsorship deals and bridged the gap between Olympic and Paralympic competition.

Yet those remarkable sporting triumphs and the fame and fortune it brought Oscar Pistorius receded into the distance as the South African stood motionless in the dock in Pretoria as he received a five-year sentence for the fatal shooting of his girlfriend Reeva Steenkamp on Valentine's Day 2013.

In the most favorable scenario for Pistorius, he could be released from prison in 10 months under house arrest.

But even then, former athletes, officials and marketing experts believe a full comeback will be extremely difficult.

A dramatic return in time for the 2016 Paralympics is out of the question after the International Paralympic Committee (IPC) stated that Pistorius would be banned from competing for five years.

The IPC had previously stated that the South African would be allowed to compete in Rio if he was not in jail.

While there is a possibility Pistorius may be out of prison before the Games begin in Brazil, the IPC has since clarified that this will also include any period that Pistorius serves out under house arrest.

\"We've been quite clear throughout this process we would respect what sanctions the judge put down,\" IPC director of media and communications, Craig Spence, told CNN

\"Oscar can resume his career if he so wishes once he's served his sentence in full,\" Spence added, before clarifying that the IPC's position may change should the sentence be reduced or lengthened.

Since bursting on to the scene at the Athens Games of 2004, Pistorius has been the Paralympic movement's poster-boy.

Spence acknowledged the huge impact Pistorius has had but he pointed to the wealth of talent and inspirational athletes competing at the London Paralympics to emphasize the strength and depth that now exists in para sports.

The IOC, meanwhile, refused to be drawn on whether today's sentencing meant Pistorius would be able to compete in future events.

\"We take note of the court's decision,\" said the IOC in a statement. \"This is a human tragedy for the family of Reeva Steenkamp and also for Oscar Pistorius. We hope very much that time will bring comfort to all those concerned but at this stage we have no further comment to make.\"

The Tokyo Olympics of 2020 could still offer a shot at sporting redemption but there will clearly be a question mark on whether Pistorius' athletic powers will be on the wane by then.

Former Paralympic athletes like Britain's Dame Tanni-Grey Thompson have previously stated that even making the 2016 Olympics having missed months of training and competition would have been difficult for Pistorius.

Members of the Pistorius family also recently told CNN's Robyn Curnow that the athlete's future career is not part of his immediate plans. Instead, he would focus on his life in jail, potentially starting a running or gym club whilst behind bars.

His uncle, Arnold Pistorius, told reporters earlier Tuesday that \"Oscar will embrace this opportunity to pay back to society. As an uncle, I hope Oscar will start his own healing process as he walks down the path of restoration. As a family, we are ready to support and guide Oscar as he serves his sentence.\"

The sponsors and the brand

Even if Pistorius does manage to make a miraculous sporting comeback, it is highly unlikely he will be as big a draw to sponsors and fans as he has been in the past.

The athlete's image was pulled from billboards across South Africa after his arrest in 2013 and sponsors suspended their deals.

\"This is the end of his brand,\" said Simon Chadwick, professor of sport business strategy and marketing at Coventry University, who added that Pistorius' transgression was very different to the indiscretions of sports stars like Tiger Woods or Lance Armstrong, who lost sponsors.

\"None of those people actually killed anyone. It's going to be very, very difficult and very risky for a commercial partner to associate with Pistorius,\" Chadwick said.

\"It will reflect too negatively for (anyone) to make a commitment to Pistorius. I think as a global and an international property, this is it, it's over, it's the end.\"

However, there are commercial options potentially still available to Pistorius.

\"If he comes out of prison and seeks in some way to redeem himself -- maybe if he was to become a very high profile campaigner for women's rights or for ending violence against women -- and was seen to be taking what has happened ultra-seriously, certain types of brands could be interested,\" Chadwick said.

\"That's a real outside chance and Pistorius would have to work very, very hard.\"

The second option would be if he was able to attract lots of small sponsor.

\"He was a trailblazer in the sense he put the Paralympic movement on the map and in short he'll be cheap,\" added Chadwick. \"Small brands trying to raise awareness might choose to associate with the athlete,\" but any campaigns would likely be \"very low key and possibly domestic.\"

Another option is for Pistorius to cash in on giving his side of the story.

\"The third way back for him would inevitably be book deals, maybe a deal for TV -- commercially it may well be he makes money that way,\" Chadwick said.

\"What Pistorius needs right now is very careful advice from representatives who really do know what they're doing.

\"On the one hand there are commercial opportunities there for him but they need to be handled very gently and very thoughtfully. If he's seen to be making too much money it will undermine efforts at redemption.

\"For his agent, business managers, communications consultants this is a huge and very tricky job,\"added Chadwick.

\"I'm really not sure there will be a way back for him. Unless he goes straight into the next Paralympics, breaks a world record and makes all the right noises on redemption.\"