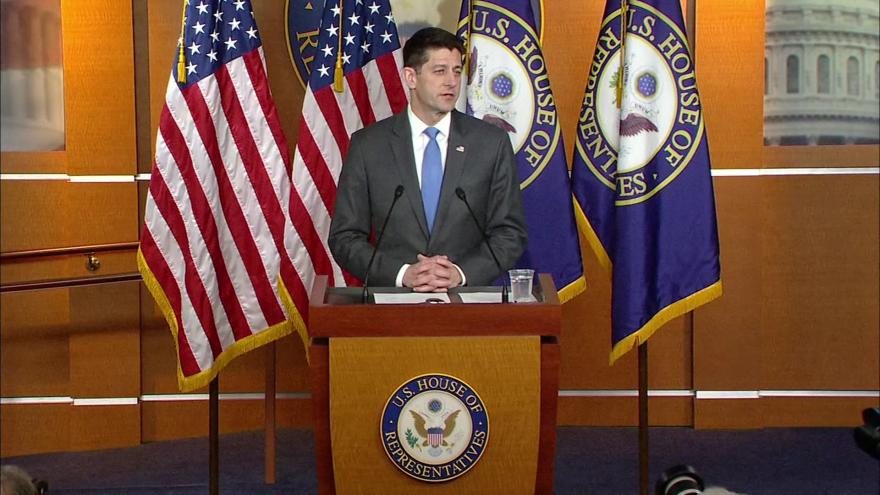 WISCONSIN (CBS 58) -- Following House Speaker Paul Ryan's announcement that he will retire at the end of his term, several organizations released statements:

“As the national gun violence prevention movement grows and voters aim to unseat politicians beholden to the gun lobby, Paul Ryan recognizes the writing on the wall. His cowardice and inaction on the American plague of gun violence make him vulnerable in November, and he knows it.

“Since his election as speaker on October 29, 2015, Ryan has seen five of the deadliest mass shootings in modern history -- Las Vegas, Orlando, Sutherland Springs, Parkland, San Bernardino -- occur on his watch. Each time, Ryan presided over a shameful ritual in the House of Representatives: a moment of silence followed by inaction.

“What’s more, during his speakership, an estimated 89,829 Americans have been killed by guns. The vast majority of those never even received their thoughts and prayers from the speaker’s Twitter feed.

“Paul Ryan will go down in history as an inept and cowardly leader who would rather quit than do the right thing. So as he slithers away from Congress in disgrace, we want to offer him our thoughts and prayers.” --Coalition to Stop Gun Violence Media Director Andrew Patrick

“Speaker Paul Ryan’s decision not to face Wisconsin voters this year is yet another major warning sign for Governor Scott Walker’s campaign,” said DGA Press Secretary Melissa Miller. “Voters in Wisconsin want change – and that’s why both Ryan and Walker faced difficult paths to re-election. Unfortunately for Walker, panic buttons and wake up calls don’t fix roads or improve schools. Wisconsin voters know he’s spent his time as Governor chasing national celebrity at the cost of Wisconsin’s middle class families, and no level of blaring alarm bells can change that.”

“The hundreds of working families who make up the IBEW Local 494 wish Speaker Ryan and his family the best as he returns to private life.

“This is increasingly one of the most important races in the nation. Speaker Ryan realizes working families are sick and tired of his leadership, because he has consistently attacked the working class, and used his powerful position to advocate for big-money donors, not his middle-class constituents.

“Now, we are looking forward to electing our union brother, Randy Bryce, to Congress. He will be a member of Congress focused on improving his constituents’ lives, and we can count on him to stand up for collective bargaining, unions, and the labor movement.”-- IBEW Local 494 Business Manager Dean A. Warsh

“People across America can now look forward to a time where Paul Ryan is not working every day to undermine our fundamental freedoms, including reproductive freedom. Ryan repeatedly tried-- and failed -- to repeal the Affordable Care Act, and each day he’s been in office, he’s shown that he does not stand with women and families. Instead of championing women and families, Ryan chose to champion Donald Trump’s backwards agenda. Trump’s legacy is Ryan’s legacy - that’s how history will remember him.

“The people of Wisconsin are now one step closer to getting the representative they deserve in Randy Bryce, who, unlike Paul Ryan, will fight for the rights of all people and believes unapologetically that women’s rights are human rights. NARAL and our members are energized to fight as hard as they can to make sure Randy Bryce can take his pro-choice values to Congress.” --NARAL National Communications Director Kaylie Hanson Long

"History will not be kind to Paul Ryan. He will not be remembered as a visionary or a great legislator, but as a weak representative that compromised what little integrity he had to appease Donald Trump and an authoritarian administration. Paul Ryan has never been a leader, but rather a run-of-the-mill Republican, who’s biggest claim to fame will be pushing through an abomination of a tax bill that lines the pockets of his wealthy friends at the expense of working Americans.

“Paul Ryan has been a champion for his constituents and a respected leader among his peers," said Chairwoman McDaniel. "He has left an indelible mark on Congress as an institution, most notably helping to secure the largest tax cut for the American people in a generation. We are grateful for his service to our country and his leadership in our Party."--RNC Chairwoman Ronna McDaniel

“I first met Paul Ryan at the house of Waukesha County Chairman Don Taylor in 1998. He was and still is one of the most classy, down-to-earth people you will ever meet – treating everyone with dignity. Whether it was serving as Mitt Romney’s Vice Presidential nominee, chairing two committees, or most recently as Speaker, Paul Ryan has accomplished things that have made us incredibly proud.

“Paul Ryan has been a passionate advocate for Wisconsin and a dedicated public servant for two decades. A tireless fighter for conservative principles, Paul was an ideas guy who was always fighting for hard-working Wisconsin families. From the bottom of my heart, I want to thank Paul for everything he has done for Wisconsin and the Republican Party.

“Wisconsin Republicans are committed to keeping this Congressional seat and I am confident that our eventual nominee will uphold Paul Ryan’s legacy of principled, conservative leadership.” --Brad Courtney, Chairman of the Republican Party of Wisconsin

“Paul has been a friend, a leader, and a phenomenal representative for Wisconsin’s 1st Congressional District, so today’s announcement is very much bittersweet. We appreciate his decades of service to his district and his unwavering dedication to fight on our behalf. We were honored to have Paul represent us in the House of Representatives for the past twenty years and wish him and his family well as they look forward to a new chapter in January.

“Republicans in Southern Wisconsin are united both in their respect for Paul Ryan and in their commitment to electing another capable conservative who can represent us in Congress.” --Kim Travis, Chair of the First District Republican Party