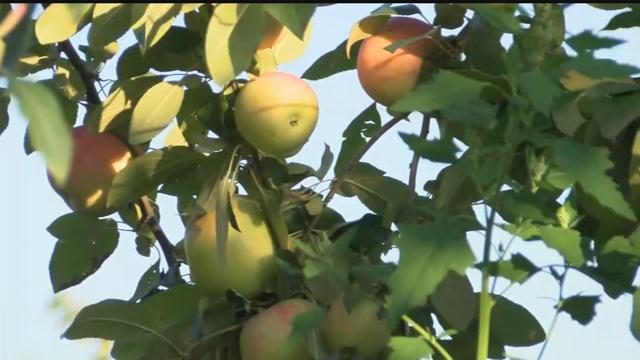 It's only August but many local orchards are opening their doors, well before the \"normal\" harvest time.

It's not even fall yet but many local orchards are kicking things into high gear, expecting a high number of customers this year.

\"It's because the customers are knocking on the doors. We're getting customers often in July and August asking how the crop is?\" said Richard Polansky.

Polansky says calls have been pouring in to Haf's Road Farm, the small seven acre farm boasting a large variety of apples, with more than 50 kinds to choose from.

\"Honey crisp and gingergold and jonagold; those are our most popular varieties,\" Polansky said.

So Richard and his wife Debbie are cutting their summer short, ready to meet their customer's needs.

\"Getting crates ready, coolers cleaned and getting people back online as to when they're going to start showing up for work,\" said Polansky.

They say an earlier harvest is possible because of a modern variety of apple called \"Zestar!\"

\"People are really hungry for these apples and it's a great eating apple, cooking apple and it makes us have to prepare for the season a few weeks earlier than normal,\" he said.

\"Zestar!\" is harvested about a month before most apples and a crew has already been out picking the best.

\"It's not just picking apples off the tree, it's evaluating the fruit,\" he said.

And though this part of the season is the busiest, it's the couples favorite and they're already looking forward to  their customers enjoying the \"fruits\" of their labor.

Hafs road orchard will have apples ready for you to pick up as soon as this weekend but if you want the full picking experience we have a list of other orchards here: http://www.wisconline.com/attractions/orchards.html
Reporting from Genoa city as CBS 58