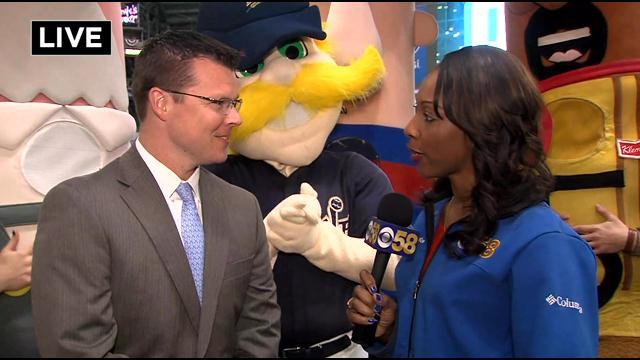 New to the Brewers' broadcasting team this year is Jeff Levering.  He joins the Brew Crew as the commentator when Bob Uecker is not available.  Last year it was announced that Uecker would not be making as many road trips with the team as he has in previous years.  When he's not around, Levering will fill in.

Along with play-by-play duties, he will have an active presence on the team's social media accounts.  He will also host a weekly Brewers podcast that will feature interviews with the players, management, and everyone else fans want to hear from during the season.

Levering played baseball all through college before switching over to behind-the-mic duties.  Levering spent the past two seasons as the lead broadcaster of the Pawtucket Red Sox.

Asked about what how he thinks the Brewers look heading into the regular season, he says the team's batting average is looking good and Kyle Lohse is a pitcher to watch.  His Opening Day prediction is a Brewers' win and two trips down the slide for Bernie.
Share this article: