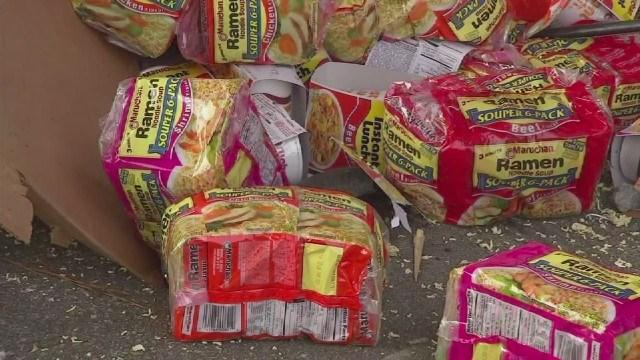 There might be a lot of college students going hungry tonight.

A truck filled with ramen noodles crashed on a North Carolina highway Wednesday, spilling hundreds of boxes of the dorm-room dish and tangling traffic while workers, some dressed in protective gear, cleaned up the mess.

Trucker Larry Scholting was delivering a payload of Maruchan Ramen on I-95 when he fell asleep at the wheel early Wednesday morning near Rocky Mount.

\"I thought I could make it down to the truck stops in Kenly, and I didn't quite make it. I kind of drowsed off, and next thing I knew, I had taken out the guardrail,\" he told ABC News affiliate WTVD-TV.

State troopers said the truck ran off the road and hit a highway bridge, shearing the trailer's cargo space in half and spilling hundreds of noodle packages onto the pavement. Nobody was hurt.

As for the mountains of ramen? Sorry, hungry folks. It was thrown away because it was contaminated by diesel fuel.

It's unclear whether the trucker's noodle spill landed him in hot water -- an employee at the Heartland Express shipping company said nobody was available to comment.