One thousand miles for Habitat: one man's journey 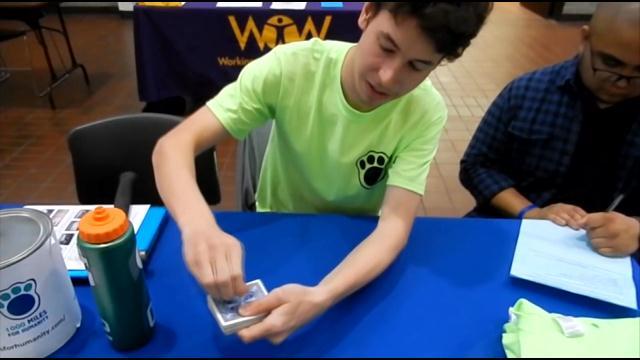 Many students take it easy on their summers off from school, but one college student from Illinois is instead taking the journey of a lifetime, part of which will bring him through Wisconsin.

It started out as a personal challenge for John Bendewald: bike one thousand miles but now that he's partnered with Habitat for Humanity, this ride could help out people in at least three states. John has a passion for biking, one that has inspired him to take a three week bike ride from Skokie, Illinois,  all the way to Duluth, Minnesota.

\"I decided I wanted to go on a trip for myself, just a journey of personal growth,\" said Bendewald.

But when he realized that journey would get in the way of his other passion, building homes with Habitat for Humanity, he took action.

\"I thought, how can I make this up to Habitat and I decided to turn it into a fundraiser. I'm going to be stopping at about twenty different Habitat affiliates and putting on magic shows to raise money for them. And in exchange, they're going to be letting me spend the night and giving me food,\" he said.

His mom says, she isn't surprised he's using his talents to better the world.

\"It's something Johnathan would want to do,\" said Jane Bendewald, his mother.

Every dollar John earns will go back to Habitat for Humanity, so they can keep building houses like this one here in Racine. Money this local chapter said, is greatly needed.


\"Right now, just by word of mouth we're getting 10-15 families a month. There would be a lot more families looking for help if we did some advertising; we probably would be overwhelmed,\" said LeAnn Launstein, executive director of Habitat for Humanity, Racine.

But just as much as money, Habitat needs volunteers, and John hopes, his magic show will generate those as well.

\"The magic show we've put together is educational so all the tricks are designed to teach people what Habitat is and what we do, and how you can get involved,\" he said.
It's not an easy trip. Some days John will log up to 95 miles and sleep in a tent, but his mom says, she is happy he's using his talents to make the world a better place.

\"I'm so proud of John. He's always been a very compassionate young man.\"
John's journey begins on May 15th in Skokie, Illinois. He plans to be in Racine on June 4th and will do his magic show in Monument Square. You can find out more information by contacting the Racine Habitat organization here: http://www.habitatracine.org/

Here is a link to his web page: http://1000milesforhumanity.com/

If you can't make it to one of his magic shows, you can donate to his Youcaring page here: http://www.youcaring.com/project-fundraiser/1000-miles-for-humanity-help-raise-money-for-habitat-/319603

Finally, Racine's chapter of Habitat wants to remind everyone that one of the best ways to help out Habitat is by shopping at their \"ReStore,\" which is located at 2300 Dekoven Avenue in Racine.  The store is filled with new and gently used household items, like furniture, but also building supplies as well.