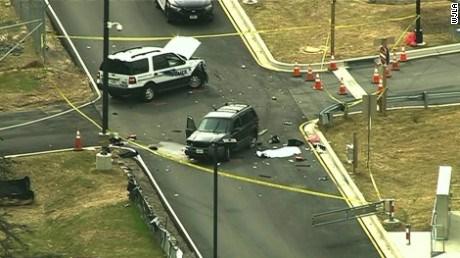 (CNN)One person is dead, and two more were hospitalized after an unauthorized vehicle tried to gain access to the National Security Agency campus in Fort Meade, Maryland, according to the NSA, which is investigating the incident.

\"Shortly before 9:00 AM today, a vehicle containing two individuals attempted an unauthorized entry at a National Security Agency gate,\" Jonathan Freed, NSA director of strategic communications, said in a statement. \"The driver failed to obey an NSA Police officer's routine instructions for safely exiting the secure campus. The vehicle failed to stop and barriers were deployed.\"

NSA police on the scene fired on the vehicle when it accelerated toward a police car, blocking its way, according to the NSA. One of the unauthorized vehicle's two occupants died on the scene. The other was hospitalized, as was an NSA police officer.

The two men who officials say tried to ram the main gate at NSA headquarters were dressed as women, according to a federal law enforcement official.

Investigators are looking into whether the men were under the influence of drugs following a night of partying, a federal law enforcement official said.

A man reported his car stolen from a hotel not far away from NSA Headquarters and said he had been with two men who had taken his car. Cocaine was found in the vehicle. The Howard County Police Department confirms that a Ford Escape reported stolen in Howard County, Maryland, is the vehicle involved in the incident.

The FBI said Monday morning that it was conducting an investigation with NSA police and other law enforcement agencies, and interviewing witnesses on the scene. The incident took place near one of the gates to the complex, far from the main buildings. The FBI said they did not think terrorism was related to the incident.

\"We are working with the U.S. Attorney's Office in Maryland to determine if federal charges are warranted,\" the FBI said in a statement.

This is the second security incident this month involving the NSA. At the beginning of March, a former state correctional officer was arrested, accused in a string of Maryland shootings, including one at Fort Meade. Gunshots struck a building near the NSA office, according to a police report.

Officers stopped Hong Young, 35, of Beltsville, Maryland, and recognized his vehicle as matching authorities' description of a car seen in surveillance footage near some of the other shootings. A gun in the car matched evidence found at the shootings, and Young was arrested, authorities said.

Police said earlier this month that there were no links to terrorism in the case, and no motive has been determined. No one was killed in the five shooting incidents.

In addition to the headquarters of the NSA, Fort Meade is home to 95 units from all branches of the armed forces and offices that report to several Defense Department agencies, according to the U.S. Army, which operates the base.

About 11,000 military employees and 29,000 civilians work there, according to the Army.

Some 6,000 people also live on the base, which began operations in 1917 as a garrison for World War I draftees, the Army said.