One Neighborhood in Chicago Hopes to Create A "No Shooting Zone" 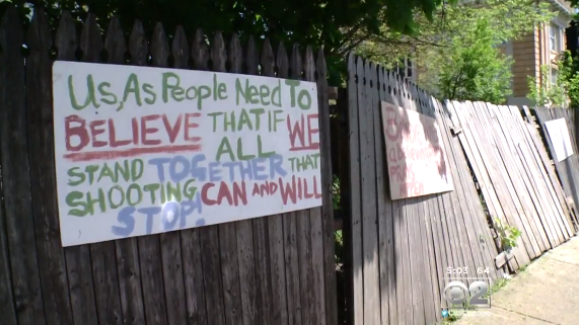 CHICAGO (CBS) — Englewood is no stranger to violence, but there are also signs of hope.

“No Shooting Zone.” “Thanks for my Child.” “My Day is Complete, I Heard a Child Laugh.” Those signs are on several blocks, in Englewood. Englewood resident Dionne Frye is the visionary behind these signs.

Her message to shooters?

“We’re tired of going to the funeral home

and you have to come through us! We’re the women. We bear the children and it’s just gotten out of hand.” The mother of eight girls is the founder of the non-profit

group MASS, Mothers Against Street Shooters. The inspiration for the organization is her daughter’s 16-year-old friend.

“Shaquise Buckner was gunned down on 73rd and Laflin with a AK-47,” Frye said. Armed with an idea, wood, and paint two years ago, Frye is now working to change Englewood, one block at a time. She puts up new signs each month.

The violence in Englewood has a permanent imprint on 24-year-old Demar Farris. Farris has lived in Englewood nearly his entire life. He has a four-year-old son. “I want to see our children grow.”

Dionne Frye says her goal is to raise enough money for counseling and parenting classes for her community. Right now, she uses her own money to pay for all of the fundraising efforts.