One killed, three others wounded in Seattle college shooting 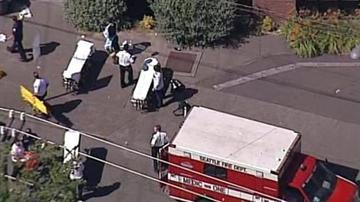 SEATTLE (CBS) -- A gunman opened fire Thursday afternoon in a building at Seattle Pacific University, killing one person and wounding three others before one student grabbed his gun and several others tackled him, police said.

Police said the suspect entered the building, shot four people in the foyer and began reloading his shotgun.

At that point a student who served as a building monitor confronted the shooter and grabbed the gun, struggling with the gunman and pushing him to the floor, said West Precinct Capt. Chris Fowler.

\"Other students jumped on top of him and were able to pin him to the ground until police arrived,\" Fowler said.

The suspect was under arrest.

A 20-year-old woman was in critical condition and undergoing surgery, hospital officials said. Two other men, ages 24 and 22, were in satisfactory condition.

The campus, located about 10 minutes from downtown Seattle, was placed on lockdown as first reports of the shooting were received. Traffic around the school was blocked.

\"Campus is in lockdown due to shooting near Otto Miller Hall. Classes are suspended. Please do not come to campus,\" the university posted on its website.

\"Our heartfelt prayers are with the entire community,\" the university later posted.

Police initially said there was a second suspect in custody, but later said there was only one person under arrest and no other suspects were being sought. They said Otto Miller Hall had been secured.

Students said they were shocked by the violence at the Christian university, which has about 4,200 undergraduate and graduate students.

\"Right away it was like my heart had sunk because it is such a safe place and close, tight-knit community,\" senior Nate Johnson told KIRO. \"I have a lot of friends who are science majors and engineering majors who would have been in Otto Miller, a lot of friends in the athletic building, which is just across the street.\"
Share this article: