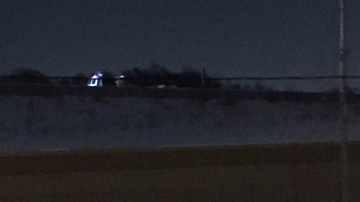 One person is dead and three are injured in a late night car crash on I-94 at Highway 142 in Kenosha.   According to the Kenosha County Sheriff’s Department, it appears that the car driven by a unidentified woman spun out on the freeway and crashed into the median in the southbound lane of I-94 around 11:15 Monday night.   The car, a Volkswagen, was then struck by a  Chevy Astro Van.   The woman, who was alone in the car, died at the scene.   The three people in the van received moderate to serious injuries are were taken to a local hospital for treatment.  The ages and genders of the three injured people were not available at this time.   Investigators are attempting to identify the deceased woman and then notify next of kin.   The southbound lanes of I-94 were closed shortly after the accident as emergency personnel responded and accident investigators reconstructed the scene.  Southbound traffic was  diverted off I-94 at the HWY 142 exit and then re-entered the freeway at the HWY 142 on-ramp.   The full freeway reopened to traffic around 3 AM.