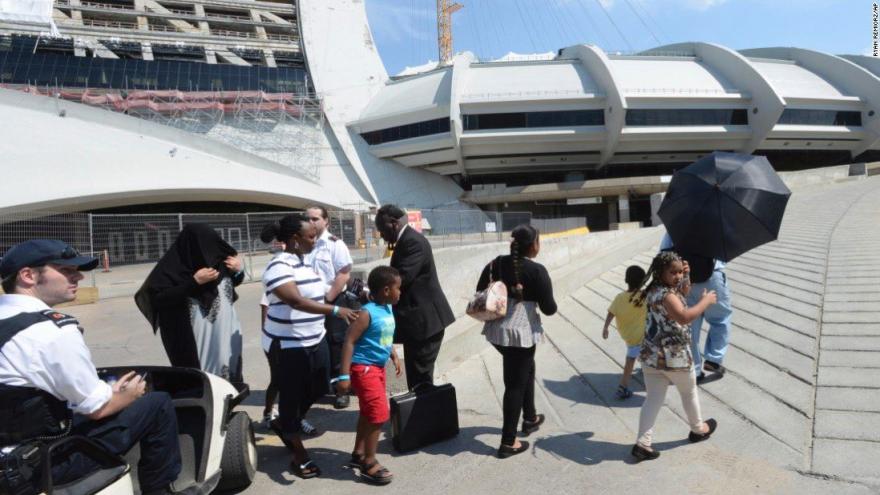 (CNN) Olympic Stadium in Montreal opened its doors as a temporary shelter amid growing numbers of people who've fled the US to seek asylum in Canada.

Many who arrived to the stadium on Wednesday are Haitians, according to CNN's partners, CTV and CBC. They came off shuttle buses holding their children and their belongings, as they got in line to enter the building.

In recent months, a soaring number of people have crossed to Canada from the US. Many have expressed concerns that they'll be deported under President Donald Trump's policies.

Amid the increasing influx to Canada, shelters in Montreal are full so the Olympic Stadium is being used, reported CTV.

The stadium, which had been built to host the 1976 Summer Olympics, had more than a hundred green cots along with blankets and metal dividers set up inside its massive, concrete halls.

"The city of Montreal welcomes Haitian refugees. You can count on our complete support," tweeted Montreal Mayor Denis Coderre.

He also tweeted that it was "yet another consequence of Donald Trump's immigration policy."

More than 4,000 people have been intercepted as they crossed into Canada this year, according to the government's data. Of the 4,345 crossings, 3,350 -- the vast majority -- were in Quebec.

Montreal has a large Haitian community, which may be a reason why many Haitians are crossing into Quebec, an official told the CBC.

Haitians living in the US since the 2010 earthquake had been given temporary protected status, which allowed them to work and protected them from deportation. But earlier this year, Department of Homeland Security officials urged Haitian recipients to prepare for the program's potential expiration in January.

Senior DHS officials said in May that conditions in Haiti were improving since the earthquake seven years ago -- and that the program could be terminated next year.

This has sent many Haitians across the northern border.

One Haitian woman told the CBC that she left the US because she didn't "know what was going to happen."

"So we checked online and we saw that Canada was going to welcome Haitians, and that's why we come here," she told the CBC after crossing into Quebec.

In the first half of 2017, more than 18,000 people sought asylum in Canada, according to government figures. It accounts for just half of the year, but it's already more than 75% of the total number officials registered last year.

Experts caution that it's harder than it sounds to meet government requirements under Canadian asylum laws and have the chance to stay.

Fearing deportation from the United States isn't enough to make an asylum case in Canada, Vilma Filici, an Toronto-based immigration consultant told CNN in May.

Just like any other country, she says, Canada has strict guidelines for granting asylum requests.

"It's not just a matter of arriving and saying, 'I'm afraid,'" she had told CNN.