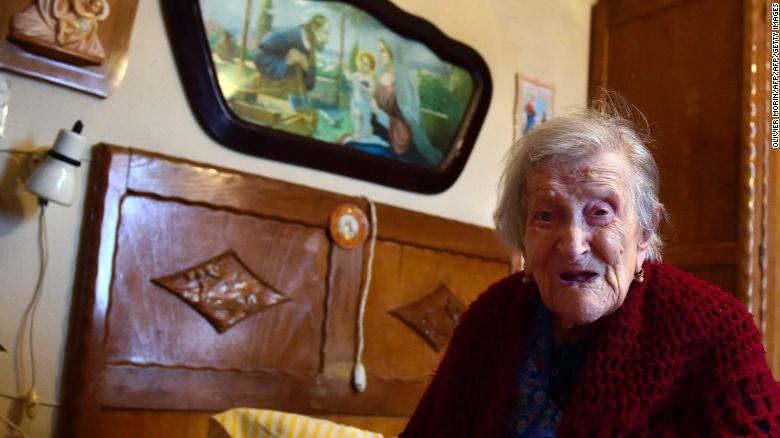 (CNN) -- The oldest person in the world, Emma Morano of Italy, credits her longevity to a diet of raw eggs and ending her abusive marriage long before divorce was even legal.

Morano celebrated her 117th birthday on Tuesday and is now the only person alive known to have lived through three centuries.

She was born November 29, 1899, in the Piedmont region of Italy, back when King Umberto I reigned.

Morano became the world's oldest living person in May, after American Susannah Mushatt Jones died at the age of 116.

Jones, who was born in Alabama, did not smoke or drink and credited her long life to sleep and loving relationships.

Longevity seems to run in Morano's family: Her mother lived to 91, and some of her sisters made it to a century.

But it was the peculiar diet she began after World War I that Morano says helped her become one of the oldest people ever.

When she was a teenager, a doctor suggested that Morano eat raw eggs to combat her anemia. She followed a stringent diet of two raw eggs, one cooked egg, a little minced meat and pasta for the past 90 years.

With age, her diet has been cut down to just two eggs a day and some cookies.

"She is in a great state of health and mind," he said. "The fact that she has never had much variety in her diet is proof that she is so well-preserved thanks to genetics."

And despite her age, Morano has a childlike love of cookies.

"She particularly loves Savoiardi cookies and hides them behind her pillow so no one will eat them," Bava said of the traditional Italian treat, also known as ladyfingers.

The other secret to Morano's long life: separating from her husband in 1938, decades before divorce was even legal in Italy, she says.

Morano's one true love was a boy killed during World War I, and she did not intend to marry anyone else, she told Italian media outlet La Stampa in comments confirmed by her niece Antonietta Sala.

But she eventually married after her future husband forced her to do so. "He said, 'If you're lucky, you marry me, or I'll kill you,' " Morano told La Stampa.

A year after her 6-month-old child died, she left her husband. "I didn't want to be dominated by anyone," she told the New York Times.